Over a century after Jagadish Chandra Bose invented radio communication, but saw Italian inventor Guglielmo Marconi walk away with the credit, he is set to get his due. The millimetre-wavelength frequency that Bose used in his experiment in 1895 is the foundation of 5G that scientists and technologists across the world are now trying to re-invent.

Every wireless network starting from 1G to 4G has focused on providing various services as per users’ priority. With the launch of the recent 4G LTE technology, the number of Internet users has grown enormously. Many applications have come up after the introduction of Unlicensed Band Spectrum for wirelessly accessible networks. In fact, there is a huge potential to create many more applications by taking advantage of low-power and low-range wide-area networks such as LoRaWAN, Wi-Fi and IEEE 802.11a/b/g/n.

4G LTE networks meet the peak speed requirements of about 100Mbps to 1Gbps according to ITU-T specifications. Since the first-released versions of Mobile WiMAX and LTE support much less than 1Gbps peak bit rate, these are not fully IMT-Advanced compliant, but are often branded 4G by service providers. On December 6, 2010, ITU-R recognised that these two technologies, as well as other beyond-3G technologies that do not fulfil the IMT-Advanced requirements, could nevertheless be considered 4G, provided they represent forerunners to IMT-Advanced compliant versions and “a substantial level of improvement in performance and capabilities with respect to the initial third-generation systems now deployed.” 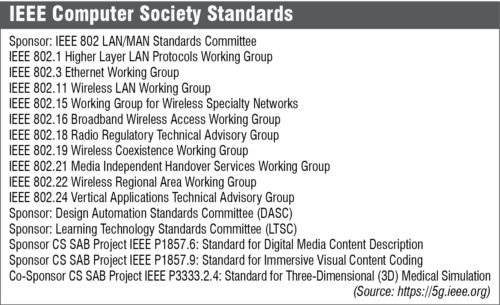 Nevertheless, manufacturers are eagerly waiting for the public release of spectral bandwidths for 5G networks.

So, what actually 5G is…

5G is referred to as the fifth-generation mobile wireless communication network, which provides a greater call efficiency with very high data rates using millimetre-wave bandwidths starting at 28GHz frequency. The very high frequency of millimetre waves, together with enormous bandwidth, makes it a highly efficient platform for sending large data. Most importantly, it consumes very little power. Currently, 5G is under field trials. And, so far, there is only a single evaluation board provided by Qualcomm.

Though Big Data and Cloud support the emerging Internet-based applications like Internet of Things (IoT) and Internet of Everything (IoE) over LoRaWAN, these need to transfer larger data streams rapidly through the Internet. The present 4G LTE networks can handle them nicely but are still not consistent at times. 5G network uses beam-division multiple-access (BDMA) technology, which overcomes this issue using its quasi-orthogonal filter banks. This access technology makes it possible to create massive multiple-input multiple-output (MIMO) environment, supporting communications for multiple users without any issues.

Also, 5G will be scalable and fast enough to support the IoT, so users will be able to access and use their appliances from anywhere without any delay. Low latency makes the network less prone to other network signals. According to Nokia analytics, its latency response time is as less as 3 milliseconds, while 4G LTE’s response fluctuates at 8-10 milliseconds. This makes 5G easy to integrate in the upcoming intelligent devices, making transmission and reception of log data and command sets easier.

The IEEE organisation has standardised this technology so that scientists and researchers from all over the world can access it and utilise accordingly (refer box and Fig. 1). 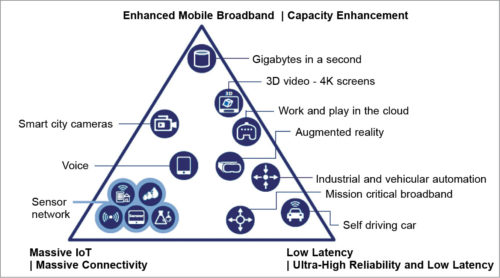 The 1Gbps data rate of 5G networks also seems to support all the augmented and mixed reality based applications ‘live’ on the Internet. It will stream multimedia at much higher data rate, so users will be able to run 4K ultra-HD videos very easily.

MIT is doing its own tech analysis and researches based on the 5G telecom techniques and improving algorithms for transferring digital frames in patterned ways. According to some analysts, by 2020, 5G services will start in India under a public-private partnership project (5G PPP).

5G makes its way in medical sector and very stringent areas also, since the full-duplex transceiver provides a very accurate and fast response. Some militaries already use full-duplex technology, which relies on bulky equipment. To achieve full duplex in personal devices, researchers must design a circuit that can route incoming and outgoing signals such that these don’t collide when an antenna transmits and receives data at the same time. 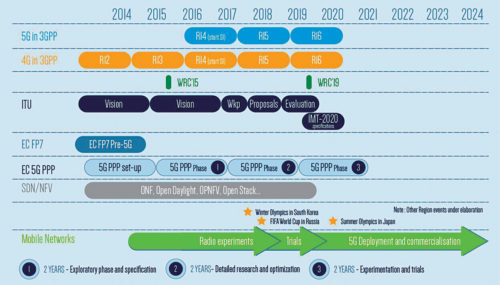 This is especially difficult because of the radio waves’ tendency to travel both forward and backward on the same frequency-a principle known as reciprocity. But recently, experts have assembled silicon transistors that act like high-speed switches to halt the backward roll of these waves, enabling them to transmit and receive signals on the same frequency at once.

One drawback of full-duplex technology is that it also creates more signal interference through a pesky echo. When a transmitter emits a signal, that signal is much closer to the device’s antenna and therefore more powerful than any signal it receives. Expecting an antenna to both speak and listen at the same time is possible only with special echo-canceling technology.