Communication And Internet Technology: From IPv4 To IPv6

IPv6 can be compared with IPv4 in terms of two important parameters, namely, address space and IP header simplification. A few people projected the death of the Internet due to increased traffic, yet with IPv6, Internet access is guaranteed, with exponential increase in Internet users over time with the provision of abundant address space. 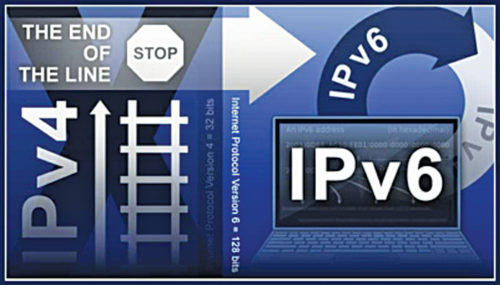 Let us begin with a simple question: Why go for IP version 6 (IPv6), when IPv4 is already standardised and is widely used across the globe? The answer is: IPv4 is crippled with challenges. First, it has 32-bit address scheme. Due to an exponential growth of Internet users, literally the address space of IPv4 is running out of addresses. The exponential growth rate of Internet users in the world just in the last five years is given below, as per the statistics of Internet World Statistics (IWS)/International Telecommunication Union (ITU):

In IP next generation (IPng) or IP version 6 (IPv6), 128-bit address space (in place of 32 bits of IPv4) and minimum 40-byte IP header (in place of minimum of 20 bytes of IPv4) have been proposed. IPv6 is for coping with increasing demands of Internet access. IP addressing for IPv6 is with 128 bits or 16 bytes.

Second, due to the huge growth of Internet users, organisations are being assigned C addresses in IPv4. This is causing an exploration in the routing table of the Internet.

Third, IPv4 is for best effort delivery of packet. It neither guarantees packet sequence integrity nor bonded latency in delivery and is, hence, not suitable for real-time services, like voice and video. Thus, with IPv4, quality voice, video and multimedia services are not being serviced.

On the other hand, growth in voice IP traffic is increasingly huge. IPv6 has been proposed to address the stated limitations of IPv4. IPv6 does so with added features, as given below.

(a) IPv6 has a fixed header size unlike IPv4. Options and padding are variable fields in IPv4. These have been removed in IPv6. This makes IPv6 act in asynchronous transfer mode (ATM) cell in comparison to IPv4, which is a conventional packet in data network.

(b) There is no header checksum in IPv6. This modification is made based on the experience that there is no need for checksum at each intermediate node.

(d) Type of service (TOS) field of IPv4 is removed in IPv6. This removal is also based on experience, as TOS field is hardly used in IPv4.

Technically, IPv6 can be compared with IPv4 in terms of two important parameters, namely, address space and IP header simplification. A few people projected the death of the Internet due to increased traffic, yet with IPv6, Internet access is guaranteed, with exponential increase in Internet users over time with the provision of abundant address space of 2128.

With a simplified header description, IPv6 is prone to provide multimedia (voice, video and data) services. It is therefore the future replacement of IPv4.

It was felt that a new version after IPv4 should take care of more addresses, reduced overhead, better routing, support for address renumbering, improved header processing, reasonable security, and support for multimedia and mobility. IPv6 has two new fields: flow label and priority. These are included to facilitate the handling of real-time services like voice, video and quality multimedia services.

Salient features of IPv6, also shown in Fig. 1, may be summarised as:

Functions of IPv6 headers bytes are given below.

These are suitable for conventional data and non-real-time services. Different priority levels under the first eight levels are used as 0 for no priority, 1 for background traffic like net-news, 2 for unattended transfer like e-mails, 3 remains reserved, 4 for attended bulk transfer like File Transfer Protocol (FTP), 5 remains reserved, 6 for interactive traffic such as Telnet, X-windows and so on, and 7 for control traffic such as Simple Network Management Protocol (SNMP) and routing protocols.

Each flow is uniquely defined by the combination of the source address and a non-zero flow label. Flow label can be from 000001h to FFFFFFh in hex. Packets having no flow label are given a zero label. All packets in the same flow must have the same flow label, same source and destination addresses, and same priority level. The initial flow label is obtained by the source using a pseudo random generator, and subsequent flow numbers are obtained sequentially.

Unicast address is for a particular host. A unicast packet is identified by its unique single address for a single interface network interface card (NIC) and is transmitted point-to-point.

A multicast address is for all hosts of a particular group to receive the datagram.
The anycast address is to address a number of interfaces on a single multicast address.
Unlike IPv4, IPv6 addresses do not have classes. Address space of IPv6 is sub-divided in various ways based on purpose of use. The notion for writing IPv6 address is each double byte of the 16-byte field is separated by a colon. Bytes are written in hexadecimal symbols.

It is found that several fields of IPv4 are no longer in IPv6. Notably among these are checksum, option and fragmentation fields. One of the primary goals of designing IPv6 was the fast processing of packets. Error check is done at upper layers, namely TCP/UDP in IPv6. With no option field, IPv6 is made of fixed size frame, reducing node processing delay. However, scope of extension of the header exists in IPv6. Scope of fragmentation is made a function of source only in IPv6, unlike at every router in IPv4.

It is typically that of loose source and record routing (LSRR) option field of IPv4 and is used to provide addresses of routers that IPv6 packets shall follow to reach the destination node. This is useful for sending packets by the virtual circuit switching mode of store and forward technique. This makes IPv6 support time-sensitive services of large data.

It is used for the purpose of fragmentation of packets as in IPv4. Minimum IPv6 packet size is 1280 bytes. When the receiving node is on a network that has maximum transfer unit (MTU) and is less than 1280 bytes, the sender fragments the packets. By fragmentation, packets are made of the size that the network may carry.

Details of fragmentation are conveyed to the receiving node by fragment extension header. For example, when the packet is fragmented, each part of that packet is assigned the same identification number. Identification number is of 32 bits and the same is notified in variable extension header field. In IPv4, intermediate nodes may fragment data. In IPv6, only original sender or node can fragment data.

This is used to authenticate that the original packet sent by the sender is received perfectly by the receiver. When extension header is included, variable extension header fields will include the authenticated code like that of MD5 (message Digest 5) or digest by hash function of all headers. Note that the hop count field will change at each hop. Thus, digest is either excluded from the hop count field or its code is made 0 in authentication.

This is used to provide data security to the payload only by means of encryption/decryption technique, ES (Data Encryption Standard). When this header is included, the sender provides security information in variable extension header fields. The receiver using the information in variable extension header fields decrypts the payload.

IPv6 has dropped the fragmentation and reassembly feature at intermediate routers. Data, if required, is fragmented for packetisation at the source only. Reassembling is done at destination only. When an IPv6 packet received by any intermediate router is too large to be carried forward on the outgoing link, the router simply drops the packet and then sends an ICMP error message to the sender. Error message so sent reads like Packet Too Big. The sender on receiving the ICMP error message Packet Too Big fragments the packet in a smaller size and then transmits fragmented packets, each as one unit.

This article is dedicated to Internet Engineering Task Force (IETF) for proposing IPv6 to provide global accessibility of the Internet.