Compelled by the continuous pressure on profitability improvement, manufacturers continuously look to invest in solutions that will help them increase their productivity with minimal assets. That’s where industrial automation acts as an enabler to increase reliability and efficiency, thereby improving return on investment (ROI).

Using devices such as programmable logic controllers (PLCs), industrial personal computers (PCs) and programmable automation controllers (PACs), automation solutions streamline industrial processes without requiring human intervention. A study by McKinsey Global Institute estimates that automation could raise global productivity by as much as 1.4 per cent annually. Moreover, all occupations have a partial automation potential as a significant portion of their activities can be automated.

Accenture forecasts the potential of automation devices to double the gross value added (GVA) across 12 developed economies by 2035, with labour productivity increasing up to 40 percentage points. All the above facts suggest that automation as an industry has huge growth potential.

Similarly, automation market in India has been growing significantly over the last decade due to the increasing need for reliable and cost-effective ways of production. According to a report published by Ken Research, the Indian industrial automation industry is expected to reach ` 197 billion by 2020 with growth driven by rapid adoption of modern technology backed by cost-saving features. The demand for factory automation solutions in India is anticipated to surge with increase in domestic manufacturing and emphasis on increased process efficiency.

Moreover, relaxation in foreign investment norms has encouraged a number of foreign companies to set up their businesses in India. The high quality and quantity of products and services offered by these companies have helped to transform the Indian industrial automation market.

Introduction of automation in the Indian economy has resulted in higher-quality products, faster and more efficient production (thereby reducing waste) and accidents minimisation on the production floors.

According to a TechSci Research report, factory automation solutions are seeing a growing demand from automotive hubs across India. Other sectors driving the demand include oil and gas, discrete manufacturing and energy management.

Process automation is currently under some threat because fresh investments in commodities like steel, cement and fertilisers are drying up due to global over-capacity. So, demand from those areas is expected to flatten a little. Sectors with good prospects are pharmaceuticals, food processing, engineering components, defence manufacturing and, of course, infrastructure. 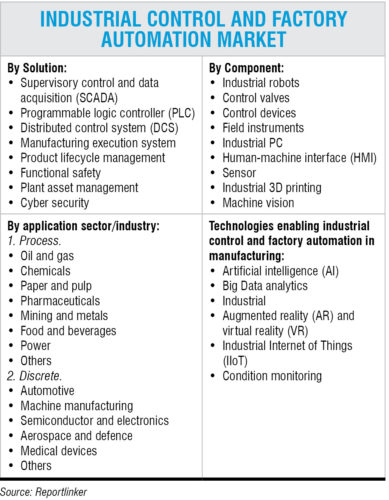 In India, the western region has the highest concentration of manufacturing plants, mostly in the states of Gujarat and Maharashtra (37 per cent of establishments) followed by the southern states of Karnataka, Tamil Nadu and Andhra Pradesh (27 per cent of the establishments). Every zone has a belt where automation activities have flourished with profound concentration of manufacturing activities.

TechSci reports that western and northern regions are major markets for factory automation in India due to continuing industrial growth and presence of special economic zones and various automotive hubs in these regions.

Automation is not a phenomenon that happens overnight—it takes years for the economy to adjust and evolve with the growing technology. However, evolution of automation from assistance to full adoption is likely to take several decades depending on several factors listed below.

The demand and supply of skilled and unskilled workers directly decide which activities will be automated. Countries with higher wages, for example, in service sector, may employ automation sooner than countries with lower wages. India as a developing country still suffers from the lack of skilled manpower in the automation sector.

Automation requires a significant amount of capital spending as it involves installation of hardware such as robots with huge levels of dexterity, devices with sensory perception competency and wheels that allow mobility. This leads to huge initial costs. However, costs decline over time, making automation more competitive with human labour.

Automation devices often require continuous modifications and maintenance in order to meet the ever-changing functionality of systems. As systems become more advanced, software updates are required. Developing and deploying these devices require huge investments in the years to come. Thus it is crucial to deploy a system that is flexible enough to evolve and adapt.

Automation can be deployed only in areas that are technologically advanced enough. Machines are required to reach a certain level of competency in order to carry out automated activities.

The rate of automation adoption is affected by regulatory approval and the response to such technologies by the public. Businesses and government policies may slow down adoption. In some cases, people may be uncomfortable with robots replacing human beings, especially in very intimate settings such as hospitals.

Studies suggest a downward pressure on employment and wages if machines could entirely substitute workforce, especially low-skilled labour. This, in turn, may act as a deterrent to adoption of automation in a highly populated country like India.

For companies that are looking to apply automation to any number of areas, data access is going to be one of the biggest challenges. Artificial intelligence and automation devices require hundreds of thousands times more information than humans to understand concepts or recognise features. Sometimes, small companies and startups may not have sufficient data collection facilities to run automation processes.

Today, manufacturing has evolved to such an extent that only through innovation and investment in technologies can businesses gain the productivity and efficiency advantage to compete in the global market.

A Frost & Sullivan whitepaper titled Enhancing India’s Manufacturing Competitiveness—Reality of Adopting Technologies and Trends concedes that the next industrial revolution will be based on unification of the information amongst participants in the entire value chain—from product inception to design, manufacturing, services and even refurbishment.  The report notes, “It will transform the manufacturing processes in sync with the speed of change in customer needs—which implies making the production process flexible without taking excess time.”

A recent report by HIS Technology forecasts industrial automation to make up majority of the IoT by 2025, with Internet protocol (IP)-addressable devices as the key enabler. The report states that industrial automation accounted for more than half of the installed base for all Internet-connected devices in 2012. The sector will grow at 36.3 per cent annually to account for nearly three-fourths of all connected devices by 2025. 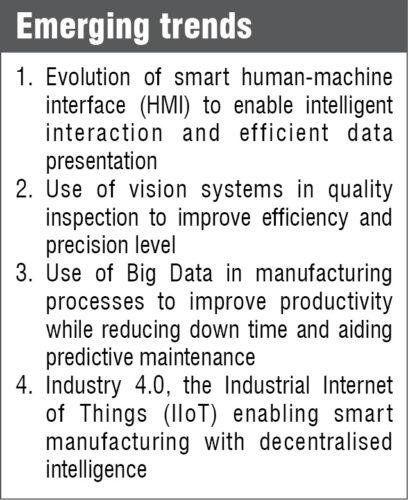 Today, the industrial automation concept is based on having one centralised ‘brain’ collecting information from manufacturing assets to facilitate production decisions. But in smart manufacturing, the intelligence is decentralised, with all of the smart assets within the factory having full information about themselves, and equipped with the processing power to optimise their own productivity and efficiency. These smart assets are also hyperconnected to optimise and coordinate each step of the manufacturing process.