VLC does not require a separate system to operate—it can be added to the illumination device. This article explores a new approach for VLC where LEDs are the transmitter, visible light is the medium for communication and a photodiode is the receiver. Thus, an attempt has been made to transmit data from LEDs to the photodiode.

Advancements in VLC lead to Light-Fidelity, or Li-Fi. Li-Fi is a bi-directional, high-speed and fully networked wireless communication technology, which is similar to Wi-Fi, or Wireless-Fidelity.

Outline of the operation of a VLC system is explained next, using block diagrams. Block diagram in Fig. 1 shows the process involving data transmission using visible light, or Li-Fi.

Block diagram in Fig. 2 shows the process of the transmission. Data is first obtained from the user and then converted into bits by a microcontroller (MCU) (Arduino is used in this case). Then, on-off keying (OOK) modulation technique is applied, and light pulses are generated from the light source.

Block diagram in Fig. 3 shows the process of the receiver operation. Light pulse obtained from the light source is sensed by photosensitive elements (LDR in this case). Sensed pulse is demodulated and bits are identified. Transmitted data is framed from received bits.

A transmitter module contains a power supply, LEDs and Arduino MCU. It converts electrical waves into optical pulses. VLC transmitter is different from a conventional communication transmitter. It acts as a communication transmitter and an illumination device simultaneously. For each character, seven bits are assigned uniquely. Each character is identified by a 7-bit combination. LEDs have a high flickering rate. Hence, these can be set to switch off and on at an extremely low time delay (a few milliseconds), so that the process cannot be detected by human eyes.

The concept of VLC is similar to infrared (IR). Any kind of light source with faster switching speed can be used as the transmitting device for VLC. However, some are better suited than others. For instance, incandescent lights quickly break down when switched on and off frequently. Thus, these are not recommended to be used as VLC transmitters. More promising alternatives are fluorescent lights and LEDs.

Fluorescent lights are usually used for illumination. But these can also be used as transmitters, because these can flicker well enough to transmit a meaningful amount of data.

LEDs are replacing fluorescent lamps, since LEDs are highly power-efficient, and have a longer lifespan. This is a major advantage for VLC communication. Since LEDs have a higher flicker rate than fluorescent lights, rate of data transmission is increased greatly.

Development of LEDs has made solid-state lighting an emerging field. LEDs have surpassed incandescent light sources in terms of reliability, power requirements and luminous efficiency. Efficiency of LEDs is much higher than that of incandescent lamps. LEDs and lasers are used as transmission sources for VLC. White light-based LEDs are an attractive candidate for being used as VLC source.

Input data (character) to be sent from a personal computer is first converted into corresponding binary code, in which 1s in the binary code represent LED on. Similarly, 0s represent LED off. The character is represented in binary form by the MCU in Arduino. Because of the high on-off speed characteristic of LEDs, humans cannot perceive the twinkling phenomena, so both lighting and information transmitting can be realised simultaneously. Generated optical signals carrying original information are then delivered to the indoor wireless channel.

In the above example, seven bits are assigned to each character [A-Z] in Arduino. The program for transmission is compiled and uploaded to Arduino, which controls the light at transmitter end and sends the compiled information. The 7-bit assumption for each character is given in Table I.

In binary representation, logic 1 represents LED on and logic 0 represents LED off. This modulating technique is known is OOK. Here, the LEDs are not completely turned off in off state, but the level of intensity is reduced.

A receiver module contains photodiode, Arduino and PC. Light from the transmitter is picked up by a single, or an array of, photosensitive filament on receiver side. In VLC receiver, light is detected using a photosensitive device and then converted to photo current.

Parameter specification of VLC is different from that of IR communication because of different wavelengths. When subjected to light energy, a photoconductive light sensor changes its physical property. A photoresistor (light-dependent resistor, LDR) is the most commonly used photosensitive device. It is a semiconductor device that uses light energy to control the flow of electrons and therefore the flow of current in these.

LDR is preferred because it has low rise and moderate fall times. Faster rise and fall times are essential for faster transmission of data. The signal produced by the transmitter is received completely by the receiver. The surrounding illuminating light increases the base luminance but does not alter the variations produced by the transmitter. By adopting the base luminance of an environment, variation produced can be fully received by the receiver even after reflection. The most commonly used photoconductive cell is LDR. Silicon photodiode, phototransistor, avalanche photodiode, PIN diode and camera (array of light-sensitive elements) can also be used as a receiver.

The coding technique (OOK modulation) used in the transmitter section is interrupted and the corresponding decoding technique is used. Decoding is done by the MCU or microprocessor at the receiver end. Binary representation of each character is stored at the receiver end, too. Here, it is used for matching the obtained signal via LDR from the LED with actual binary representation. For example, 7-bit code for character A is assumed to be [011 0001] in transmitter section. It is saved at the receiver end so that it can compare the obtained signal word with the actual word. 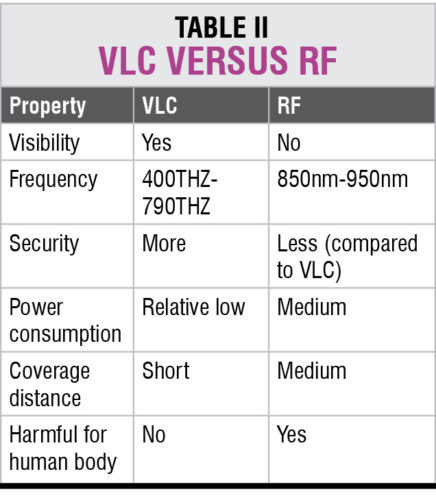 Variations in LDR due to light emitted by the LED at the transmitter end are continuously observed by Arduino. Received variation is amplified and compared with the binary representation of the character, which is predefined in the transmitter. Thus, the character is displayed as output in the computer via Arduino’s serial monitor.

Speed of VLC can be up to 100 times the speed of Wi-Fi. In laboratories, speed of Li-Fi can be up to 224Gbps using suitable modulation techniques.

VLC does not require external power as it has power for LED light. It simply alters the light emitting frequency to transmit data. Illumination lights are used in this technology.

The antenna frontend is not required in this technology, which reduces power consumption greatly. Since existing illumination LEDs are used, a transmitter is not required.

Similarly, the receiver is a photosensitive element. There is no restriction in the angle of projection. Hence, more receivers can benefit from a single transmitter.

VLC uses visible light for communication. Hence, it is easy to determine who receives the message. Also, it is impossible to tap the communication without breaking the link.

VLC does not affect the human body at all. Thus, transmission power can be kept high if needed.

VLC has a bandwidth range from 430THz to 750THz. This range is larger than the bandwidth in RF communications, which is from3kHz to 300GHz.

No company owns property rights for visible light and, thus, no royalty fees have to be paid. No expensive patent/licence needs to be purchased to use visible light for communication purposes.

The buildings can be designed to function in many ways. For example, if VLC technique is used in Burj Khalifa (currently the world’s tallest building), it can either illuminate the whole building in a particular pattern or it can transmit the message over a great distance, making communication among its neighbours possible.

By pointing visible light from a Li-Fi modem to another device, a high-speed data link with inherent security can be created. This overcomes the problem of pairing or connecting, by providing a much higher data rate than Bluetooth or Wi-Fi.

In hazardous environmental areas where there is a risk of explosions (mines, petro-chemical plants and oil rigs) and radioactivity-free zones (hospitals, reserved forests, etc), VLC is inherently safe and provides both illumination and communication.

Traffic signage, traffic lights and street lamps are adopting LED technology, so there are multiple application opportunities here. VLC can be used for vehicular communication due to the presence of vehicle lights and existing traffic light infrastructure. High-priority applications for vehicle safety communication include collision warning, pre-crash sensing, emergency electronic brake lights, lane-change warning and curve speed warning, among others.

Such high-priority applications require reliable reachability with extremely low latency. Due to extremely low allowable latency in vehicle safety communication, a high-speed VLC system like Li-Fi can be useful.

An outdoor VLC system using controller area network (CAN) has been proposed, where backlights and headlights are used for communication.

The ability to send data quickly and in a secure way is the key to many applications. Visible light not being detected on the other side of a wall has great security advantages.

There are advantages of using VLC in hospitals and in healthcare. Cellphones and Wi-Fi are undesirable in certain areas of hospitals, especially around MRI scanners and in operating theatres. This is where VLC can come in.

Wi-Fi cannot keep up with the growing demand for wireless data. VLC can provide data rates higher than Wi-Fi. This can be done at a low cost, since radio frequency (RF) components and antenna systems are eliminated.

Radio is undesirable in passenger compartments of aircraft. LEDs are already used for illumination and can also be used instead of wires to provide media services. This reduces aircraft construction costs and weight.

RF does not work underwater, but visible light can support high-speed data transmission over short distances in this environment. This could enable divers and underwater vehicles to talk to each other.

Although this technology is still in its infancy, with further studies and development its far-reaching applications will only get better. VLC technology is all about using LED light bulbs meant for illumination to also send data simultaneously. It is best suited as an alternative for data transfer where radio transmission networks are not desired or possible. In future, we will be able to transmit an image, audio and even a high-definition video using LED light bulbs.

Achuthan Kumar S. is an electronics engineering undergrad from Chennai, India, whose goal is to provide an Internet connection through VLC.