Mysteries of the deep sea, vastness of the blue waters stretching out to the horizon, and the tremendous potential of the oceans for military and civil applications have let humans explore the world of the mighty waters—an effort that is still ongoing.

Deep-sea exploration gives mankind a sense of human progress, because it involves great manpower and technology. It also leads to academic and industry researchers show great interest in deep-sea sensors. There is good progress being made in modern deep-sea research and development with recent advancements in sensors, microelectronics and computers.

Underwater drones and portable submersible robots with intelligent sensors for monitoring water temperature, auto compass heading and depth, turns, pitch and roll have been developed. Due to technological advancements, underwater drones can now move around freely, faster and more easily.

Robots and artificial intelligence (AI) have been developed to explore the oceans where humans cannot reach. Stanford University has developed a robotic mermaid named OceanOne to dive deeper than humans can. This robot’s human-like body with touch sensors can carry out a variety of tasks in the deep sea. Its wrists are fitted with force sensors that give haptic feedback to the operator’s control. These feedback signals can identify actions such as the robot grasping at something firm and heavy, or light and delicate. The brain of the robot reads data and makes sure that its hands keep a firm grip on objects.

Nereus is the world’s deepest-diving underwater vehicle. It can be configured to operate as a remotely-operated vehicle (ROV), or operate independently of human control as an autonomous underwater vehicle (AUV). Nereus is capable of exploring and mapping the sea floor using sonars and cameras.

Ocean Sensor Systems manufactures sensors and wave instrumentation for use in oceans and seas, for the worst environmental conditions.

Let us explore the various types of deep-sea sensors.

Dissolved oxygen (DO) meter to assess water quality and measure the amount of dissolved oxygen in a liquid is one of the most important instruments because of its influence on the organisms living in water. DO sensor for depths of up to 6000 metres consists of a pre-amplifier covered by a titanium housing, as shown in Fig. 3. This complete sensor is used to interface CTD probe systems.

Seismic activity under the water is monitored by placing pressure sensors on the seafloor. Piezoelectric (quartz crystals) sensors produce electric charge when placed under pressure. These can measure pressure or weight of the water above. High or low pressure of different sections along a fault line determine where tectonic plates are locked up or are trying to move past each other. Pressure builds up between the plates, resulting in earthquakes when these break free.

Pressure sensors are prone to drift and lose accuracy over time. Electronics engineers from the University of Washington are now testing a low-cost, self-calibrating pressure sensor that could be deployed on the seafloor to monitor long-term seismic activity. Data from a deep-sea sensor network could help scientists understand what happens along fault lines.

Remote underwater observation is much easier now, because sound navigation and ranging (sonar) technology has become much more advanced. Both passive and active sonar are used in modern naval warfare from water-borne vessels, aircraft and fixed installations. Submarines depend on sonar to a great extent for underwater communication. A new generation of multi-beam sonar designed for use across a wide variety of underwater applications is shown in Fig. 6.

Underwater photogrammetry in the deep sea is different from that of land or in space. Rough conditions, high pressures, absence of natural light and refraction are some problems. Attenuation and scattering degrade the radiometric image quality and limit effective visibility.

An optical system for AUVs for the purpose of visual mapping of large areas of the seafloor up to 6000 metres has been developed. Schematic overview of the components of the high-altitude camera system for GEOMAR Remus 6000 AUV is shown in Fig. 7.

Underwater sensor network (UWSN) is used for underwater explorations. It is a network of autonomous sensor nodes that are spatially distributed underwater to collect temperature, pressure and other water-related data.

UWSN acoustic transceivers used for communication are low-frequency waves, but have long wavelengths suitable for long-distance communication. UWSN finds use in a wide range of applications for management and recovery of disaster monitoring and preventive mechanisms. UWSN with acoustic sensor networks and underwater mobile (ROVs, AUVs) sensor networks can be used on a large scale for exploration in the deep sea.

Designing for UWSN applications is based on common UWSN architectures. One-dimensional (1D) UWSN architecture refers to a network where sensor nodes are deployed autonomously and work on a stand-alone network. Each sensor node directly transmits information to a remote station.

In 3D UWSN architecture, sensors deployed in the form of clusters are anchored at different depths and heights.

Oceans of the future

Development for the next-generation ocean monitoring sensor system has already begun in the US, Japan and some European countries. It features a device called node, which is installed at the bottom of the sea and is connected to various sensor systems using an ROV.

US Defense Advanced Research Projects Agency (DARPA) has proposed intelligent floats similar to the Internet of Things (IoT). Instead of linking devices and sensors to the Internet, the Ocean of Things wire the world’s oceans with a network of sensors, capable of recording vast amounts of data about the environment. 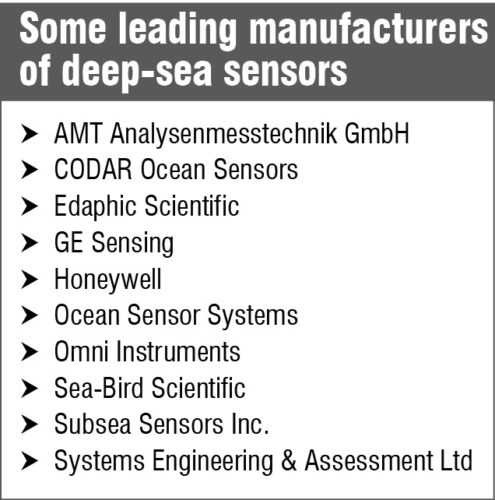 US Ocean Observatories Initiative provides researchers with spatial and temporal data from the ocean’s surface all the way down to the deep sea. It is planning to launch robots to chart the world’s oceans, with the goal of mapping everything by 2030.

A new cable network infrastructure has been developed for future expansion to meet the growing needs of science and technology over the next two to three decades (lifespan) of the network. Node functionality and sensor arrays in the network include seismic array, full water column mooring and tsunami warning system.

Various environmental conditions of the sea, including temperature, pressure and currents, can be easily monitored with sensors. Modern electronic sensors, microelectronics, nanotechnology, powerful computers and high-bandwidth cables in the oceans will likely lead to unprecedented advancements in ocean exploration and sensing in the next few decades.

The deep sea needs to be explored not only for extracting rich resources for human needs, but also for detecting earthquakes and other related natural disasters for human safety. Underwater sensor networks along with ROVs and AUVs will help humans explore deeper in the sea.