How Telecom Is Transforming Rural India?

This report shares an overview of the potential of the telecom industry in rural India and the various technologies that can help drive the initiatives.

India has no dearth of technological and business innovations for rural areas. However, telecom policies and scams have created a negative impact on the growth of this sector in rural India. Certain policies have forced Internet service providers to rethink their investments there.

The Indian telecommunications sector has grown rapidly in the last few years. India now has the second largest network in the world, next only to China. In rural areas, tele-density was 56.87 per cent, at the end of August 2017, whereas in urban areas, it was 173.72 per cent.

To enable India’s transition into a digital economy and knowledge society, large investments in infrastructure, both in optical-fibre cables and towers, for wireless transmission are required. The government is committed to extending the reach of mobile networks to around 50,000 remote, rural villages, with support from Universal Services Obligation Fund (USOF). In addition, investments are being made to lay optical-fibre cables for high-speed broadband connectivity in rural areas.

Given below are some initiatives that are being taken by the government of India in this direction.

The future of telecommunications is 5G. However, a large number of people in India live in rural and low-income zones. They live without any wireless signal coverage and connectivity. Presently, cellular technology is mostly an urban concept. 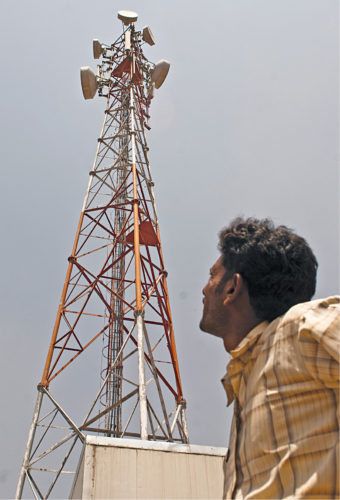 According to 2015 statistics, about 56 per cent of the world’s population does not have access to the Internet. In September 2015, the United Nations (UN) signed Universal and Affordable Internet Provisioning for Everyone, Everywhere by 2020.

Villages can be classified as small, mid-sized or large based on area and population, and can be located in hilly or plain areas. And wireless network topology depends on factors like size of village, distribution of residential houses and terrain map of village.

Broadband technology allows high-speed transmission of voice, video and data over networks and ICT applications. This, along with community antennae, optical fibres, satellites and fixed mobile wireless technologies, can also be used in rural areas effectively. The ability to access the Internet can bring a positive impact on the rural society. However, there is a wide digital divide between urban and rural areas in India, because of uneven distribution of basic telecom infrastructure.

Further, poverty and lack of education are also factors responsible for the lack of advancements in wireless technology in rural areas. Social interaction can be obtained between urban and rural masses through social media channels such as Facebook, Twitter, WhatsApp and the like. Wireless connectivity in rural areas can also reduce poverty, create jobs, and increase skills and income of the population.

Under Digital Village initiative announced in February 2017, the government of India aims to bring free Wi-Fi to 1050 villages. The initiative will follow the public-private partnership mode of operation. Services including LED streetlighting, Wi-Fi hotspots, skill development, interactive sessions with experts, government officials and so on will be provided at village panchayat level.

In the next three years, Narendra Modi government plans to lay down infrastructure including one million kilometres of optical-fibre cable network, to bring digital connectivity to the country’s 223,000 villages.

On November 13, 2017, the government announced the second and final phases of BharatNet project, which aims to provide broadband connectivity across Indian villages. It aims to provide Internet services to rural masses at affordable prices. This ambitious project is likely to add US$ 68 billion to India’s GDP.

Despite these initiatives, digital access remains abysmal in Indian villages.

Union Budget 2018 had good news for e-commerce startups in rural India. The government of India is planning to set up 500,000 Wi-Fi hotspots that are expected to provide broadband Internet access to 50 million people in rural parts of the country.

Wireless hotspots are wireless access points located typically in public locations that provide Internet access to mobile devices such as laptops and smartphones. Typical Wi-Fi hotspot venues include cafés, libraries, airports and hotels. Wi-Fi hotspots can be added to rural areas as well.

In 2005, doctors from Arvind Eye Care Systems in Tamil Nadu used a long-distance Wi-Fi network to interview and diagnose their rural patients. Till date, they have remotely diagnosed 100,000 patients and restored eyesight to 30,000.

Satellites or wireless technologies such as Wi-Max can be used to create rural links. Next-generation wireless Internet technology for rural areas is underway, with point-to-multipoint communications and integrated charge controllers for solar panels. A combination of special antennae and software can be used to convert short-distance Wi-Fi to long-distance Wi-Fi. The result is high bandwidth, in the range of 18mbps to 20mbps.

Geo-stationary balloon satellites (GBSes) float in the atmosphere, 18km to 21km above sea level at a fixed point. Air density at that height is one-tenth of sea level. Average wind speed there is also low. A propulsion system moves and maintains the balloons in position.

GBSes are powered by solar panels and receive laser power from the cell tower these hover over. These could be used to provide broadband Internet access over a large area.

To provide Internet connectivity at remote places, Google came out with an innovative solution—known as Project Loon—using such balloons. It consists of a network of balloons floating in the stratosphere. Balloons have transceivers that transmit and receive signals. The system utilises the wind obtained from National Oceanic and Atmospheric Administration (NOAA), and joins the global network by establishing a connection using Internet Service Protocols (ISP) or Long-Term Evolution (LTE) technologies. Loon balloons can travel in different directions.

Each balloon contains the following:

Mobile towers, TVs and the IoT for rural India

Many telecom giants place mobile towers only in cities and do not focus on rural areas. This is due to huge costs incurred in the setting up of these towers. Today, huge subsidies are being provided by USOF to set up passive infrastructures such as mobile towers and power supplies (such as diesel generators). Subsidies are also being provided to install active telecommunication equipment like dish antennae, flat antennae and backhaul carriage facilities.

Telecom operators continue to face problems in installing mobile towers in rural sectors. This is because individual states impose their own rules that do not match the rules imposed by Department of Telecom (DoT). Tower and Infrastructure Providers Association is fighting to overcome these differences.

Today, 70 per cent of DTH subscribers reside in rural areas. Tata Sky is the dominant DTH brand with 13.2 million DTH subscribers from rural areas alone. The rural electrification initiative by the government of India is the main reason behind the growth of Internet technology in rural India.

Virtual network operators is another recent trend. These provide services in rural areas using a network of existing TSPs having unutilised capacity or using last-mile connectivity.

National Telecom Policy 2018 aims to provide new technologies including 5G and the Internet of Things (IoT) to rural areas. Foreign direct investments also play a crucial role in the development of the telecom sector in rural areas.

Rural farming has evolved through initiatives like subsistence farming, large for-profit farms, animal-powered farming and machine farming. We are now entering the era of data-powered farming via large-scale open data sets on weather and yields, the IoT, drones and smart tractors. With help from India Electronics and Semiconductor Association (IESA), several startups are developing hardware and software to assist rural farming.

Today, small-scale farmers use drip irrigation particularly in areas where there is shortage of water and water is a precious resource. These can now be controlled remotely via a combination of installed IoT sensors and activators along with mobile applications.

Vinayak Ramachandra Adkoli is BE in industrial production. He was lecturer in mechanical department for 10 years in three different polytechnics. Now, he is a freelance writer and cartoonist.