Vehicles, system components and machines are becoming increasingly autonomous and network with each other via wireless technologies. Touchscreen based controls, remote diagnostics, vehicle status and control are being implemented using controller area network bus for interconnects. However, with the best of vehicles, all issues cannot be solved in the vehicle itself. Puneet Gupta, chief technology officer, Brillio Technologies, categorises the testing of modules into a couple of categories. He says, “First, we have the immediate threats that need to be handled at the user end. Then, there are some problems that can be solved in the Cloud.”

Electronic stability control (ESC) is the involvement of electronics in braking systems. Such systems help drivers avoid crashes by reducing the occurance of skidding or losing control. Mehul Garg, embedded design engineer, Padmini VNA Mechatronics Pvt Ltd, explains, “On detecting a loss of control, a number of intelligent sensors automatically apply brakes to the relevant wheel.” ESC becomes active when a driver loses control of the car. It uses computer-controlled technology to apply individual brakes and help bring the car safely back on track, without the danger of fishtailing.

Under-steering and over-steering may be fun while playing games, but these can be disastrous in real life. Garg highlights the reasons to be wary of over-steering. Over-steering, for example, on slippery roads, could result in fishtailing and cause serious injury to multiple vehicles. These kinds of systems cannot be left to be processed in the Cloud. Immediate action has to be taken, that would require a support system after sensing a discourse.

Besides the dangers that require immediate attention, there are several threats over the long term. Infotainment, for example, might not allow a Bluetooth connection due to some issues. This can be diagnosed over the Cloud, resulting in in-vehicle processing focused on saving lives. So once we know the threats, what are the areas to test for?

Areas for focus in testing

Even with the most basic of vehicles, acceleration and deceleration form the crux of driving. These systems need to be tested properly with as low a chance of error as possible. Then, the vehicle should be checked to see if it follows the rules and guidelines of proper driving including acknowledging traffic lights and lane-driving. Any autonomous system at its heart employs a battery for operation. Nisarg Nirmalkumar, senior software developer, RA Consulting GmbH, adds, “The battery needs to be tested as well.”

Wireless connectivity features like Wi-Fi, Bluetooth and 3G or LTE present possibilities of remote attacks. Keyless entry and ignition do not require the attacker to have physical access to the vehicle. The number of wireless standards available has created the need for similar equipment to generate signals for testing those modules. “If we have a wireless infotainment system, we need to test it for wireless standardisations as well,” says Kalyan Verma, vice president, products, TUV Rheinland India. Test solutions would typically require maximum radio frequency (RF) testing performance with flexible chip control through several software layers. 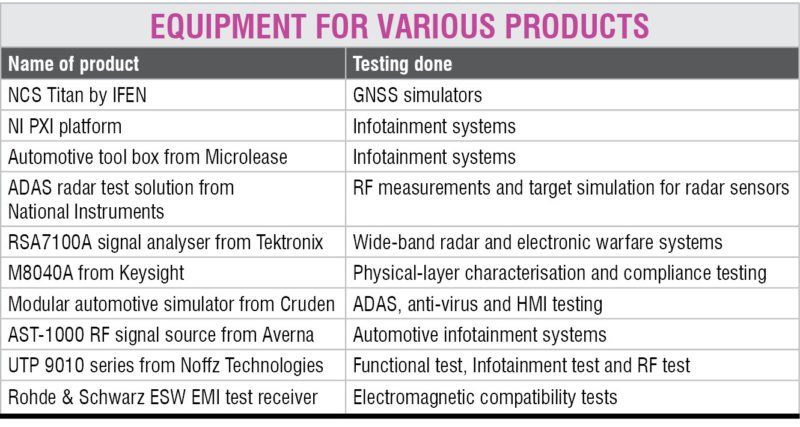 With autonomous vehicles making rapid paces in recent times, advanced driver-assistance systems (ADASes) have been on the rise. ADASes today are about taking control of the vehicle away from the driver. Sensor technologies like radars, ultrasounds, cameras and dedicated short range communication for vehicle to everything (DSRC for V2X) present attack surfaces that could seriously impact the safety of the vehicle. Radar or DSRC signals can also be easily spoofed, confusing ADAS algorithms into steering in the wrong direction, or driving into an obstacle. 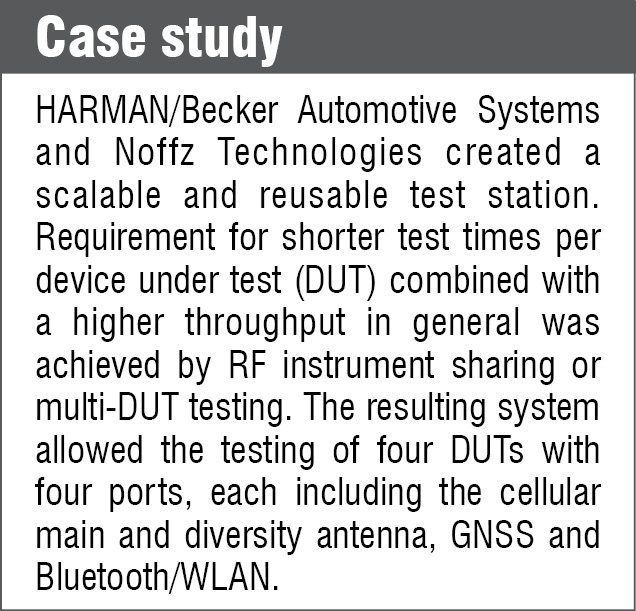 With smartphones coming into play, another issue of security arises with software applications. A Trojan Horse computer program can easily gain entry into the infotainment system through a paired Bluetooth device or Wi-Fi connection. Media content played via USB and CD are issues along similar lines. Vulnerabilities in the media code can be exploited to plant malicious software in the infotainment system. Weak information technology security further adds to the problems.

Increasing number of modules in the infotainment system.

Modular testing systems have been a big help in this regard. PXI platform from National Instruments is one solution for modular hardware platforms that can be configured with key software tools. With traditional approach to automotive infotainment RF tuner testing, test engineers need multiple instruments to generate different broadcast and navigational standards. Modular systems allow testing of multiple parameters using the same instruments. For example, the same signal vector generator can be used to simulate GPS and digital video broadcast by simply reprogramming PXI platform.

Living With Electronics: The Good And The Bad