Using their intelligence intelligently
Due to their digital nature and ability to be controlled and managed, the SSL industry will be characterised above all by the development of intelligent solutions that adjust the amount of light according to demand and the particular situation. That is, ‘tailor-made’ light with optimum energy efficiency. Such intelligent solutions using presence or motion sensors will, in fact, bring out the true potential of LEDs. 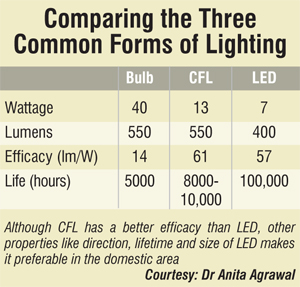 “Take for example, street-lighting, where conventional solutions always show the same brightness, no matter how dark the night is. The Arquiled LED streetlight from Arquicity is a combination of intelligent lighting management and LED lighting. The brightness of this street light is automatically adjusted according to the traffic. Intelligent lighting control can be provided by an ambient light sensor. In fact, we believe that light will be used more and more to make people feel better. Light will also be used as a design element, in other words not just to make rooms bright but to give them a different look, a different feel, a different atmosphere. With SSL, light can be much more than just illumination,” explains Dr Fiebig.

Philips is leveraging many of the exciting features of LEDs and launching such products in the Indian market too. “LEDs have digital control programmability. Unlike other lighting solutions that are analogue, LEDs are digital, highly versatile and provide many new avenues and options in terms of creativity and design across applications. LEDs provide the option of intrinsic coloured lighting and directional lighting. These provide greater control in any lighting application. In addition, through the innovative combination of various-coloured LEDs, dramatic colour-changing effects can be produced from a single fixture through dynamic activation of various sets of LEDs,” explains Goswami.

Philips’ LivingColors range enables users to express themselves by creating striking light effects to personalise their own ambience with the colour of their choice, with just the press of a button! Philips has also launched the first indigenously-developed consumer LED bulb in India, which is now available in five and seven watt variants. Recently, the company also launched an LED-based solar street lighting range for Indian roads. The solution will be applicable for urban areas as well as off-grid locations in rural areas.

Truly, there are many exciting applications in store for LEDs. LEDs, for example, have grown significantly in the medical field with new and unique equipment that have LED lights embedded in them. Ultraviolet light is used in innovative printing and curing applications. Space requirement and weight are important features in compact plants; and ultraviolet LEDs are a space-saving and efficient option to equip printing systems. LEDs can be switched on and off without delay to follow the process cycles and consume energy only when they are operated.

An essential advantage becomes obvious: the service life of the LEDs is equal to the time they are actually used. This makes ultraviolet LED light sources very efficient and economic in cycled operation. The advantages are longer servicing intervals and reduced cost of maintenance in addition to a reduction in production downtimes. LED technology is also beginning to be used in horticulture. LEDs can be used to emit specific lights that help plants grow.

Still a growing market
With so many advantages and potential applications, LED is sure to succeed in a large market such as India—provided the price factor is addressed. As per recent Frost & Sullivan and The Economic Times reports, the LED segment currently accounts for less than three per cent of the country’s organised lighting market, which is estimated at 70,000 million and is growing at 25-30 per cent a year. The LED market alone is estimated at 2000 million.

LEDs are fast emerging as the lighting technology of the future in the Indian lighting market. The overall Indian LED lighting market is expected to reach $399.2 million by 2015 from $49.6 million in 2009 at an estimated compounded annual growth rate of 41.5 per cent till 2014.

From an overall global perspective, Dr Fiebig concludes: “On one hand, the technology is still developing rapidly, the industry is on a growth curve in terms of brightness, efficacies and colour control, and on the other hand, there is still room for further advancements in terms of productivity, thereby reducing cost per lumen. With this ongoing trend toward higher performance and lower-cost LEDs, many new applications open up (e.g., within general lighting) and others are expanded (e.g., within automotive). In this sense, the industry is still in the growth phase and we expect that the creativity that we unleash in the market based on the advances in LEDs will keep us there for years to come. Another important topic is to adapt the lighting systems to the LED technology. That means in order to use the complete potential of LED, new aspects of lighting concepts have to be taken into account. This will help improve the system and application efficiency and finally cost competitiveness vis-à-vis conventional technologies.”