Some Ways To Beat The New Monster In Our Environment

The rapid growth of information, communication and entertainment technology sectors is ratcheting a viral effect on the manufacturing industries, leading to phenomenal growth in volume, variety and applications. The booming demand, rapid changes in technology, media (tapes, software, MP3), falling prices and planned obsolescence are resulting in the fast growth of e-waste.

Electronic and electrical equipment (EEE) when discarded is called e-waste. These include discarded computers, office electronic equipment, electronic entertainment devices, mobile phones, television sets, refrigerators, microwave ovens and electric appliances and devices, among others. India is likely to generate three million metric tons (MT) of e-waste per year by 2018 from the present 1.85 million MT, as per an ASSOCHAM-Frost & Sullivan study. Mumbai with 120,000MT tops the list followed by Delhi-NCR (98,000MT) and Bengaluru (92,000MT).

The study also points out that Chennai, Kolkata, Ahmedabad, Hyderabad and Pune are generating 67,000MT, 55,000MT, 36,000MT, 32,000MT and 26,000MT of e-waste per year, respectively. Computer equipment accounts for almost 70 per cent of e-waste material, followed by telecommunication equipment (12 per cent), electrical equipment (eight per cent) and medical equipment (seven per cent). Other equipment such as household e-scrap account for the remaining four per cent.

This estimate includes second-hand equipment and devices imported from developed countries for reuse, which mostly end up in unauthorised recycling yards either immediately or once the re-used product is discarded. Complex and ambiguous definitions of second-hand electronic equipment has made it difficult for the customs department to trace, identify and stop the illegal inflow of e-waste into the country. The government recently informed Apple that it will not allow import and sale of second-hand consumer products as it contributed to electronic waste being dumped in India. The discard rate of EEE is shown in Table I.

Most businesses and individuals sell their discarded EEE to informal recyclers for ease and ready money without realising the hazardous implications it causes to health and environment. Also, dumping EEE directly in the trash bin is equally hazardous to the environment. Exchange offers for old devices are one of the ways for proper disposal of EEE. Most consumer electronics brands such as LG, Microsoft, Panasonic, Philips, Samsung, Sony and Whirlpool provide such offers from time to time. For this purpose they have local collection centres. 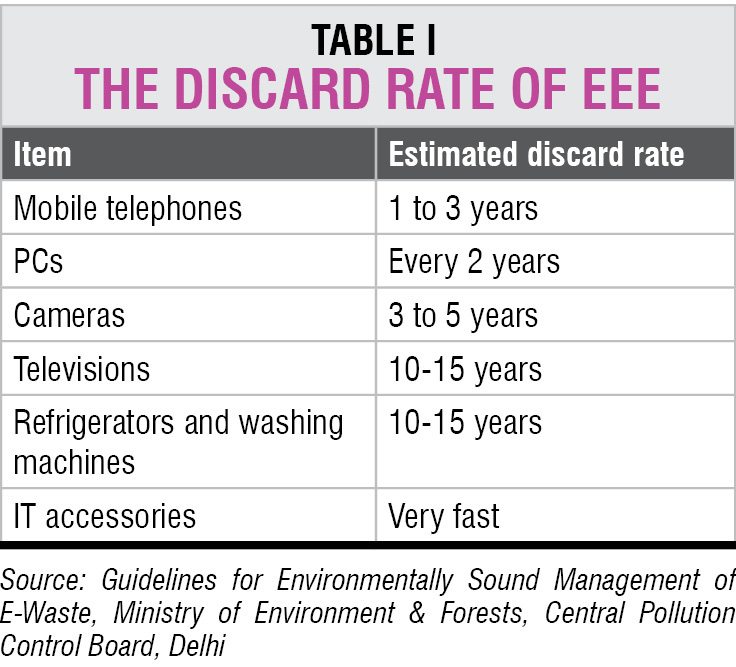 e-Waste is much more hazardous than domestic, general-industry and municipal wastes because of thousands of components made of highly-hazardous chemicals and metals like lead, cadmium, chromium, mercury, polyvinyl chlorides, brominated flame retardants, beryllium, antimony phosphors (not to be confused with phosphorus) and phthalates.

Generally, EEE comprise 50 per cent steel, 21 per cent plastic and 14 per cent non-ferrous metals, which include precious metals like gold, platinum and silver. Apple revealed in recently-released environmental responsibility report that it has reclaimed almost one metric ton of gold, three tons of silver and over 1300 tons of copper by recycling its own products in 2015.

Due to the presence of hazardous chemicals and toxic substances, disposal of e-waste has become an environmental and health nightmare. More than 95 per cent of e-waste generated is managed by the unorganised sector and scrap dealers in India. Only 2.5 per cent of India’s total e-waste gets recycled because of poor infrastructure and legislative framework, leading to waste of diminishing natural resources, irreparable damage to environment and health of the people. Recycling involves sorting, dismantling and recovery of valuable materials. Typical materials recovered from refrigerators are shown in Table II.

How e-waste is polluting the environment and affecting human health

Most of the e-waste either ends up in landfills or unauthorised recycling yards where dismantling of e-waste is done in an unorganised and unscientific way to reclaim precious metals like gold and silver. Incineration by unqualified e-waste disposers could release toxins into the air. After recovery of items with value, remaining materials are thrown in rivers, drains or disposed of in solid waste dumps, which adds to environment pollution.

Liquid and atmospheric releases end up in bodies of water, groundwater, soil and air. Hazardous chemicals including deadly dioxins and furans have been reported where recycling takes place.

Recycling and disposal of e-waste usually results in serious health and pollution problems and significant risk to workers and communities. Long-term exposure damages the nervous system, kidneys, bones and the reproductive and endocrine systems, and some of these are carcinogenic and neurotoxin. Great care needs to be taken to avoid unsafe exposure in these operations and leaking of materials from landfills and incinerator ashes. 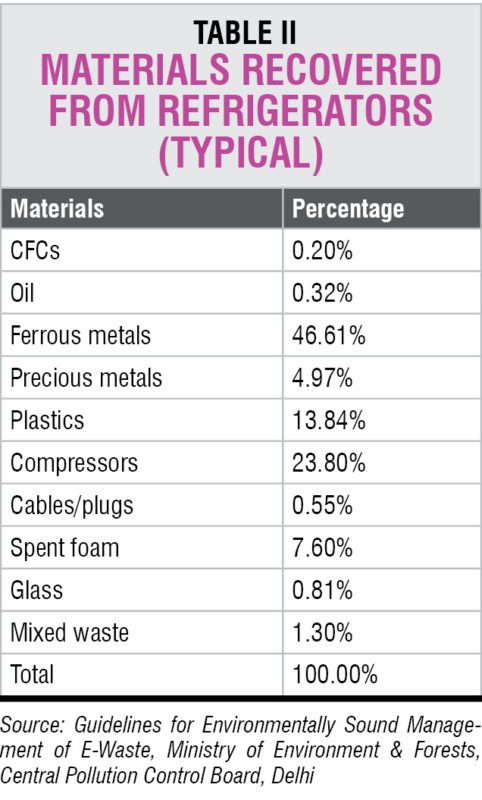 e-Waste toxins and body parts affected by these are shown in Table III. It is estimated that nearly 500,000 child labourers in the age group of 10 and 14 years are engaged in various unauthorised e-waste activities, without adequate protection and safeguards in various yards and recycling workshops. There are 148 registered e-waste dismantling/recycling units with an estimated total capacity of 450,000 per annum—a huge gap between waste generation and dismantling/recycling capacity. Karnataka has the maximum number (52), followed by Maharashtra (24), Tamil Nadu (16), Uttar Pradesh (16) and Haryana (14).