We are living in a very fast paced world. We wake up in the morning, and are in a rush to get to the office, from there we are in a rush to get home. We sleep less and focus all our energies into developing ourselves. We develop ourselves and just hope that we are working in the right direction. These ‘developers’ hone their skills with hopes of being successful in their field, without any assurance of the particular skill having a good scope in the next five to ten years. Let’s take a look at the IoT industry, so you have a better idea what the required skills are for IoT jobs. 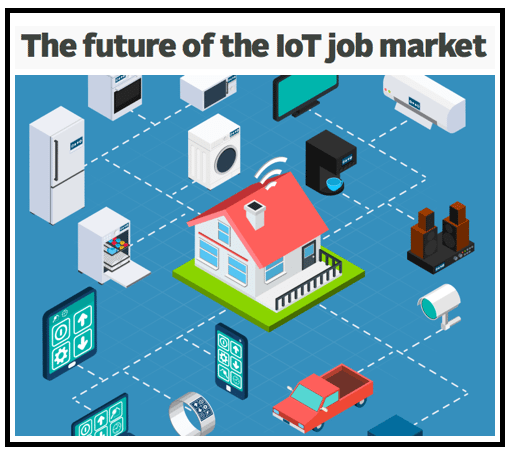 Internet of Things (IoT) seems to be the hot market associated with data analytics. Anything that you can connect to the internet is essentially the Internet of Things. With international access to internet at about 3.2 billion and counting, it relates to increasing career prospects. IoT is a still developing field with additions being made on a regular basis.

All the data that you see in print or the digital world, is being compiled and made meaningful by man-machine collaboration. This calls for specialization in the field of digging through the relevant data to compile a meaningful report. Hence data analytics seems to be the field with a large amount of IoT jobs scope, since people always require meaningful data to work with, in order to achieve something else.

The added advantage for IoT jobs, is the integration of hardware and software skills. There is still a difference, but now a person working on software can develop working interest in hardware and vice-versa. Until the IoT dust settles, there is going to be a lot of such confusion as people are going to be changing roles,

Being a part of this change is very easy. The VisionMobile report also suggests the number of IoT applications developers to increase five-fold over the next five years.

According to TechGig Code Gladiators – a coding contest organised by techgig.com, Java, C and C++ came up as the preferred language for programmers. Bengaluru, Pune, Hyderabad, Chennai, Delhi and Mumbai were the top source of contestants.

“Engineers with multidisciplinary skills are in high demand,” explains Dr. Milind Kulkarni, director engineering institutes, ITM group. According to the market, big data analytics and cloud skills are important because IoT sensors tend to send large amounts of data in real time. But the most important skills developers need, for IoT jobs, is proficiency in cloud, mobile and data analytics. Just being conversant in one skill is not enough anymore. The expertise on the trifecta would govern the salary and status with time.

IoT requires dedicated hardware and this creates a large requirement for developers with knowledge of embedded systems. Embedded system hardware and software have to be continually updated, calling for efficient development. Development skills get you started whereas creativity would keep you going.

Manufacturing hardware, adds a certain level of complexity, so as a developer, refining some of those skills in hardware, is likely to add to the skill set. This will definitely be an advantage for someone searching IoT jobs.

IoT relates to connecting every device to a network. A very large number of these connections require sensors and dedicated hardware development. The current sensors include, “vibration, RF, temperature, humidity, pressure and many more” lists Hrishikesh Kamat, chief executive officer Shalaka Technologies pvt. ltd. A dedicated hardware learns from every recorded activity. “The system can learn and update after every activity,” adds Kamat.

A lot of confusion in software

Software development is an area that requires fine tuning. Decision towards a particular technology can be made fairly easily once we have a higher number of devices. According to some industry experts, C programming, JavaScript and PHP skills should be in demand. These comprise the most basic in development and hence would provide a better way to work the system.

Some other experts believe, IoT development could see demand in Java, Android, CSS and JavaScript skills. Techgig corroborates this data w.r.t the language options. This sector is however limited to website development and management.