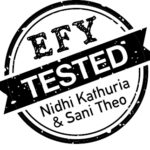 This project describes an Arduino-based wireless frequency meter designed to measure frequency of sinusoidal AC signals in the range of 50Hz to 3kHz. The authors’ prototypes of the transmitter and receiver sides are shown in Figs 1 and 2, respectively.

The block diagrams of the transmitter and receiver sides are shown in Figs 3 and 4, respectively.

The main components used in the Wireless Frequency Meter project and their role is described below.

Arduino Uno is an AVR ATmega328P microcontroller (MCU)-based development board with six analogue input pins and fourteen digital I/O pins. The MCU has 32kB ISP flash memory, 2kB RAM and 1kB EEPROM. The board provides the capability of serial communication via UART, SPI and I2C.

The MCU can operate at a clock frequency of 16MHz. In our project, Arduino Uno is used on the receiver side. Digital I/O pin 5 is used as input pin and is connected to DATA pin of 434MHz RX module. Digital I/O pins 7, 8, 9, 10, 11 and 12 of Arduino are used to interface with the 16×2 character LCD to display the value of the measured frequency.

Rectifier diodes (1N4007) are used to rectify the alternating input signal to pulsating DC on transmitter side.

MCT2E opto-coupler IC is used to isolate input side from the next stage and also produce signals from pulsating DC waveform on transmitter side.

The 434MHz transmitter (TX) and receiver (RX) modules are used to transmit and receive radio frequency (RF) signals between two devices. Carrier frequency of the module used here is 434MHz.

The circuit diagrams of the transmitter and receiver sides are shown in Figs 5 and 6, respectively.

The signal whose frequency is to be measured is applied to test signal input terminals, as shown in the transmitter-side circuit diagram (Fig. 5). In this frequency meter, test signal must be an alternating one and its amplitude must not be greater than 10V peak-to-peak.

On receiver side, 434MHz RX module demodulates the received signal. DATA pin of 434MHz RX is connected to digital I/O pin 5 of Arduino Uno, which calculates frequency of the test signal and displays it on the LCD and serial monitor of Arduino IDE. Test signal frequencies 1576Hz and 2399Hz displayed on the serial monitor are shown in Fig. 7.

This project can be used for experimenting, learning, testing and troubleshooting audio equipment in the audible range between 50Hz and 3kHz.

The components used in the project are listed in Table 1. 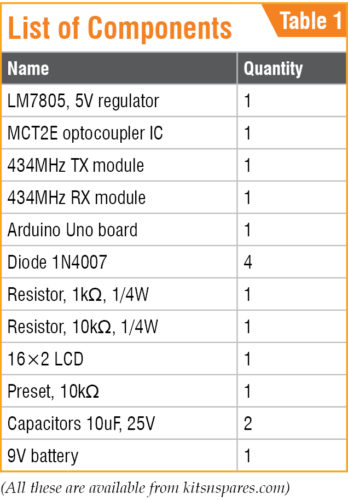 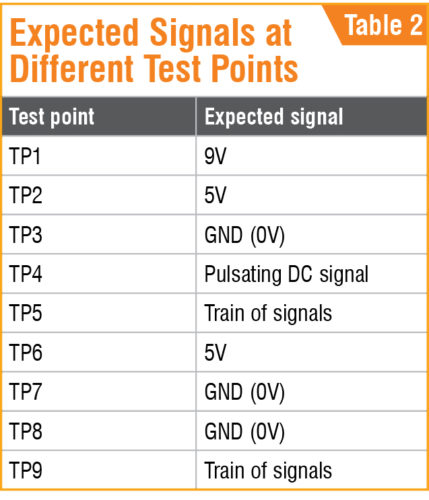