Buffer and Driver for Square-Wave Signals

Most square-wave generators have a single output that doesn’t have a high driving capability/slew rate or is not adjustable in the required amplitude range. Also, when conducting experiments or testing the electronic equipment, the errors are frequent and there is a high probability of damage to the digital generator output.

So it is desirable to have an electronic buffer between the generator output and the circuit under test. Also, the capability to vary the amplitude of the square signal output is useful when testing analogue circuits such as amplifiers and filters.

Here we describe a buffer and driver circuit for square-wave signals. The circuit has a high output driving capability and high slew rate of the output signals. It can provide TTL- and CMOS-compatible signals.

The input square-wave signal is applied to connector CON1. It is buffered with eight paralleled buffers having high output driving capabilities. If the buffers use CMOS technology, resistors R3 through R10 can be removed. If the buffers use TTL technology, these resistors normally should not be removed and can have values up to around 68 ohms, depending on the requirement.

The output signal at terminal A of connector CON4 is TTL- and CMOS-compatible. It can drive long lines and heavy capacitive and inductive loads without any problem. The value of resistor R13 can be changed, depending on the application. 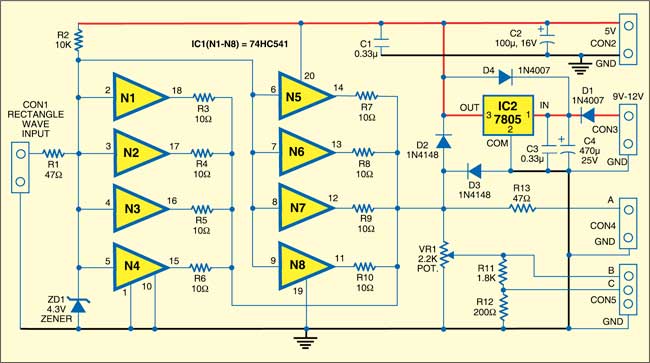 Assemble the circuit on a general-purpose PCB and enclose in a small cabinet. Fix the power supply connectors on the rear side of the cabinet and input and output connectors CON1, CON4 and CON5 on the front side. Also, connect potmeter VR1 on the front side for varying the output at terminal B of CON5. The circuit is now ready for use.