By SHIBENDU MAHATA AND SAIKAT PATRA

This article describes the implementation of a digital frequency meter using Arduino Uno to determine the sinusoidal frequency signal in the range of 20Hz to 5kHz. The logic involves counting the total number of pulses per second that appear at a digital pin of Arduino.

The authors’ prototype is shown in Fig. 1.

Block diagram of the digital frequency meter is shown in Fig. 2.

The circuit diagram of the digital frequency meter is shown in Fig. 3. It consists of Arduino Uno board, optocoupler MCT2E (IC1), 16×2 LCD and a few other components. The sinusoidal signal whose frequency is to be measured is applied to signal input terminals (CON1), as shown in Fig. 3. In this frequency meter, the test signal must be an alternating one and its amplitude must not exceed the maximum forward diode current rating of the optocoupler for a particular value of series resistance. (Here, we used 1k series resistance.)

The next stage is a bridge rectifier, which converts the alternating signal to fully-rectified pulsating DC signal. This fully-rectified pulsating DC signal is applied to the diode side of the optocoupler. With the help of the optocoupler, spikes are produced. Frequency of the spikes is twice that of test signal input. These spikes are applied to digital I/O pin 5 of Arduino, and the program running in the CPU of the microcontroller (MCU) calculates the frequency of the test signal and displays it on the 16×2 LCD and on the serial monitor of the PC.

Major components used in this project are:

Arduino Uno is an AVR ATmega328P MCU-based development board with six analogue input pins and 14 digital I/O pins. The MCU has 32kB ISP flash memory, 2kB RAM and 1kB EEPROM. The board provides the capability of serial communication via UART, SPI and I2C. The MCU can operate at a clock frequency of 16MHz. In this project, digital I/O pin 5 has been used as pulse input pin, and digital I/O pins 7, 8, 9, 10, 11 and 12 of Arduino Uno board are used to interface with the LCD.

The bridge rectifier (BR1) is used to rectify the alternating input signal to pulsating DC.

The optocoupler is used to produce spikes from the pulsating DC waveform. 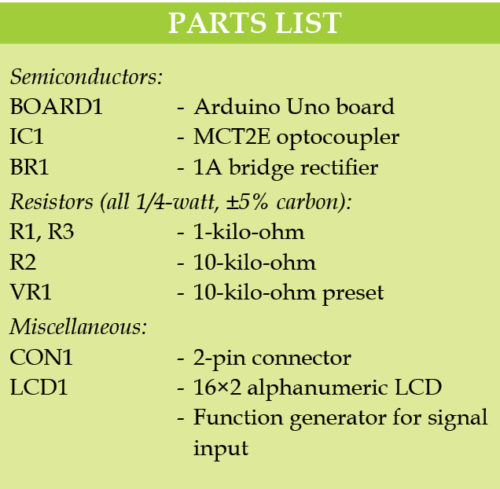 The PCB layout of the digital frequency meter is shown in Fig. 4 and its components layout in Fig. 5.

Assemble the components on the PCB, as per the circuit diagram. After this, connect the USB cable to Arduino and give the test signal at CON1 and check the frequency on LCD1 and the serial monitor of Arduino.