This project is a standalone automatic fan speed controller 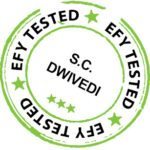 that controls the speed of an electric fan according to the requirement. Use of embedded technology makes this closed-loop feedback-control system efficient and reliable. The microcontroller (MCU) ATMega8/168/328 allows dynamic and faster control and the LCD makes the system user-friendly. Sensed temperature and fan speed levels are simultaneously displayed on the LCD panel.

The project is very compact and uses a few components only. It can be implemented for several applications including air-conditioners, water-heaters, snow-melters, ovens, heat-exchangers, mixers, furnaces, incubators, thermal baths and veterinary operating tables. The project will help save energy/electricity.

Circuit diagram of the temperature fan speed control and monitoring is shown in Fig. 1. It is built around Arduino Uno board (Board1), 16×2 LCD (LCD1), temperature sensor LM35 (IC1) and a few other components.

Arduino is at the heart of the circuit as it controls all functions. LM35 is a precision integrated circuit whose output voltage is linearly proportional to Celsius (Centigrade) temperature. It is rated to operate over a -55°C to 150°C temperature range. It has +10.0mV/Celsius linear-scale factor.

Temperature sensor LM35 senses the temperature and converts it into an electrical (analogue) signal, which is applied to the MCU through an analogue-to-digital converter (ADC). The analogue signal is converted into digital format by the ADC. Sensed values of the temperature and speed of the fan are displayed on the LCD. Temperature and monitoring using Arduino The MCU on Arduino drive the motor driver to control fan speed.

A low-frequency pulse-width modulation (PWM) signal, usually in the range of about 30Hz, whose duty cycle is varied to adjust the fan’s speed is used. An inexpensive, single, small pass transistor can be used here. It is efficient because the pass transistor is used as a switch.

One disadvantage of this approach, however, is that it can make the fan noisy because of the pulsed nature of the signal. The PWM waveform’s sharp edges cause the fan’s mechanical structure to move (like a badly-designed loudspeaker), which can easily be audible.

A single-side PCB for the temperature-based fan speed control and monitoring circuit is shown in Fig. 3 and its component layout in Fig. 4. Assemble the circuit on the PCB.

CON2 and CON3 are used to connect Board1 (Arduino UNO board) through external connectors. A 12V battery is used to drive the 12V DC-operated fan.

Software for the automatic temperature controller and monitor circuit is written in Arduino programming language. Arduino Uno is programmed using 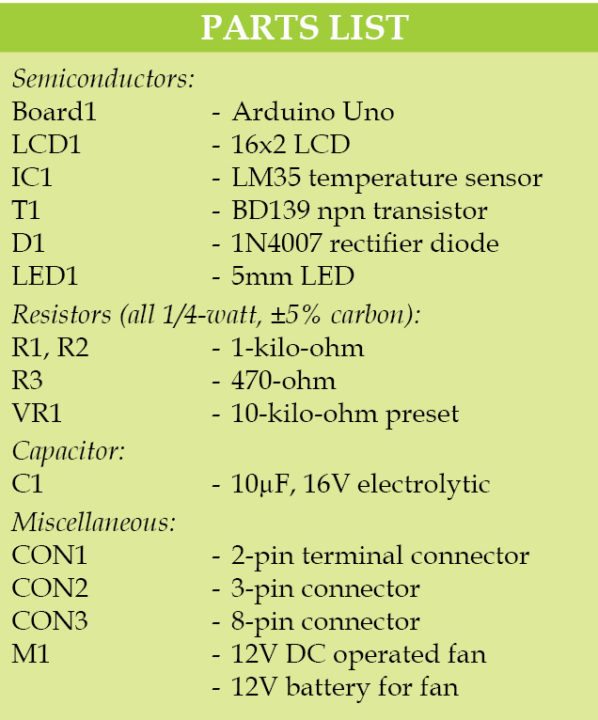 ATmega328P on Arduino Uno comes with a pre-programmed bootloader that allows users to upload a new code to it without using an external hardware programmer.