Blindness is a state of lacking the visual perception due to physiological or neurological factors. Partial blindness represents the lack of integration in growth of the optic nerve or visual centre of the eye, and total blindness is full absence of the visual light perception. In this project, a simple, cheap and user-friendly smart blind guidance system is designed and implemented to improve the mobility of both blind and visually impaired people in a specific area.

The project includes wearable equipment comprising earphones connected to Raspberry Pi and a hand-stick containing infrared sensors circuit to help the blind person navigate alone safely and avoid any obstacles. The reflected infrared signals from an obstacle are used as inputs to Raspberry PI. Based on the direction of the received signal, Raspberry Pi prompts a message in the earphones to help take suitable action.

Fig. 1 shows the pin description of a GPIO connector on Raspberry Pi. The GPIO connector has pins with different functions. The device has seven true GPIO pins, I2C interface, SPI interface, serial TX/RX pins and PWM pins that can be used to control external hardware.

Fig. 2 shows the circuit diagram of the sensor section. It comprises quad operational amplifier LM324 (IC1), three IR transmitter-receiver pairs and a few easily available components. The sensor section is connected to the GPIO pins of Raspberry Pi as shown in Fig. 2. This section gets the power for operation from Raspberry Pi itself.

The IR transmitter-receiver pairs are mounted on the left, front and right side of the hand stick and they transmit IR signals regularly. The corresponding receiver receives back the signal if it is reflected by some obstacle in that particular direction. The received signal is fed to corresponding operational amplifier of IC1. Output of each operational amplifier is limited to 3.3V by zener diodes. The Raspberry Pi detects the direction from which the signal is received and issues suitable audio message to the earphones to help avoid the obstacle. The accompanied table mentions all the messages. Presets VR1 through VR3 are used to set the reference levels for comparators A1, A4 and A3.

The person who is wearing the earphones gets the suitable commands to take necessary action. One such example is, if there is obstacle in all the directions, the user gets a message ‘better to go back’ through the earphones connected to the Raspberry Pi. 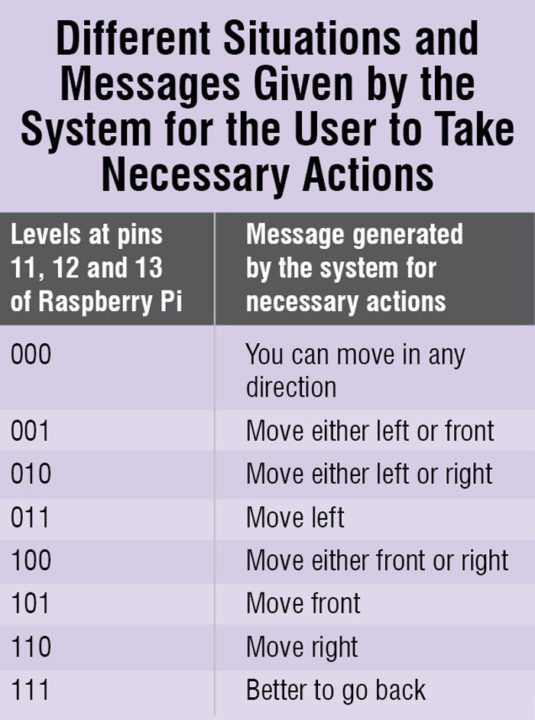