Motion sensor alarms are readily available in the market, but these are expensive. Here is a simple and inexpensive Arduino based motion sensor alarm with voice alert. It can be used for security purposes.

The circuit diagram of the motion sensor alarm is shown in Fig. 3. It consists of a PIR motion sensor (MS1), Arduino Nano (Board1), LM386 audio amp (IC1), and 8-ohm speaker. You can use any Arduino board in place of the Arduino Nano board.

Install the required library in Arduino IDE by downloading the library from SketchInclude libraryManage Libraries options, as shown in Fig. 4. Search the PCM library from Library Manager (refer Fig. 5) and install it. Similarly, follow the above steps and install the PIR sensor library.

Arduino code (Motion_Detection.ino) is written in the Arduino programming language.
Initialise the libraries in the code and also declare the sensor and indicator pins as given below:

Now, create a condition that compares with the sensor value. If the condition is true, it performs the task accordingly. Here the task is to play the sample audio file and turn on the LED indicator (LED1). Otherwise, the condition is false, with no audio alert and LED1 off. The following code performs these tasks:

A PCB layout for the motion sensor alarm is shown in Fig. 6 and its components layout in Fig. 7.

Crosscheck the wiring/connections as per the circuit diagram. Then, power on the circuit with a 12V DC supply or 12V battery. 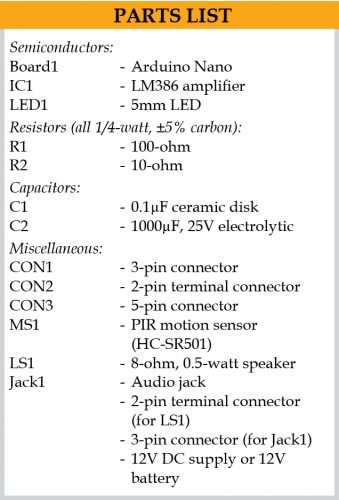 You can install this project in your backyard or any other appropriate location in your house. Then extend the speaker and wires to your room. Alternatively, you can connect it to your mini speaker amplifier through an audio jack.

Venkatesh T. is an electronics hobbyist. His areas of interest include microcontrollers, embedded systems and the Internet of Things