Temperature monitoring and control is important in industry environments. Sensors are widely used for measurement of temperature. Usually, a temperature sensor converts the temperature into an equivalent voltage output. IC LM35 is such a sensor. Here we describe a simple temperature measurement and display system based on LM35 sensor and PIC16F877A microcontroller. The temperature in degrees Celsius is displayed on a 16×2 LCD.

Fig.1 shows the functional block diagram of the PIC16F877A-based temperature monitoring system. The key features of this system are:

1. Continuous monitoring of temperature with 1-second update interval (which can be varied in the program).

Fig.2.shows the circuit of the temperature monitoring system. The circuit mainly consists of the LM35 temperature sensor, PIC16F877A microcontroller and HD44780 controller based 16×2 LCD. 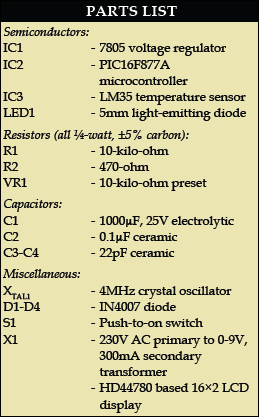 The output of the sensor is fed to the internal ADC of the microcontroller. Pin 2 of the microcontroller (RA0/AN0) is channel-1 of the internal ADC. The analogue voltage output of the sensor is converted into its equivalent digital value by the ADC and then its equivalent degree Celsius value is calculated by the software. The calculated temperature value is displayed on the LCD.

LM35 sensor. Fig.3 shows the pin configuration of LM35. It is a precision integrated-circuit centigrade temperature sensor whose output voltage is linearly proportional to the Celsius (Centigrade) temperature. The LM35 thus has an advantage over linear temperature sensors calibrated in degree Kelvin, as the user is not required to subtract a large constant voltage from its output to obtain convenient Centigrade scaling. For each degree Celsius change in temperature, the sensor output changes by 10 mV.

Pin layout of the sensor is as follows:

It means that for 4.887mV change in the analogue input, the ADC output changes by binary ‘1’ with a reference voltage of 5V.

Analogue output of the sensor at its pin 2 is connected to Port A at RA0 for conversion into digital equivalent.

The LCD. A 16×2 LCD based on HD44780 controller is used for displaying the temperature. The control lines EN, R/W and RS of the LCD module are connected to pins RA1, RA2 and RA3 of Port A of the microcontroller, respectively. The commands and the data to be displayed are sent to the LCD module in the nibble mode from Port D of the microcontroller. The higher four bits of the LCD (D4 through D7) are connected to the lower nibble of Port D (RD0 through RD3).

The software code is written in ‘C’ language and compiled using Hitech C cross compiler in MPLAB IDE. The software performs the following operations in an infinite loop:

2. Calculate the equivalent voltage value from the ADC result

3. Calculate the temperature in degree Celsius from the voltage value

4. Display the temperature on the LCD