This is a circuit for a smart phone light that uses a LDR that judges whether its day or night. If LDR detects night then a lamp is switched on when the telephone rings. The circuit takes power from the telephone line itself. -- JAYAN A.R

The circuit shown here is used to switch on a lamp when the telephone rings, provided that the ambient light is insufficient.

The circuit can be implemented using just two ICS. A light dependent resistance ( LDR),with about 5 kilo-ohms resistance in the ambient light and greather than 100 kilo – ohms in darkness, is at the heart of the circuit .

The circuit is fully isolated from the phone lines and it draws current only when the phone rings. The lamp can be battery powered to provide light during power failure or load shedding also.

The light switches off automatically after a programmable time period . If required the lamp lighting period can extended by simply pressing a push button switch ( S1)

When telephone rings, an AC voltage of around 70-80V AC present across the telephone lines turns on the diode inside the opto-coupler (IC2), which in turn switches on transistor inside the optocoupler. The voltage at its collector drops to a low level during ringing to trigger IC3 74LS123(A) monostable flip-flop. 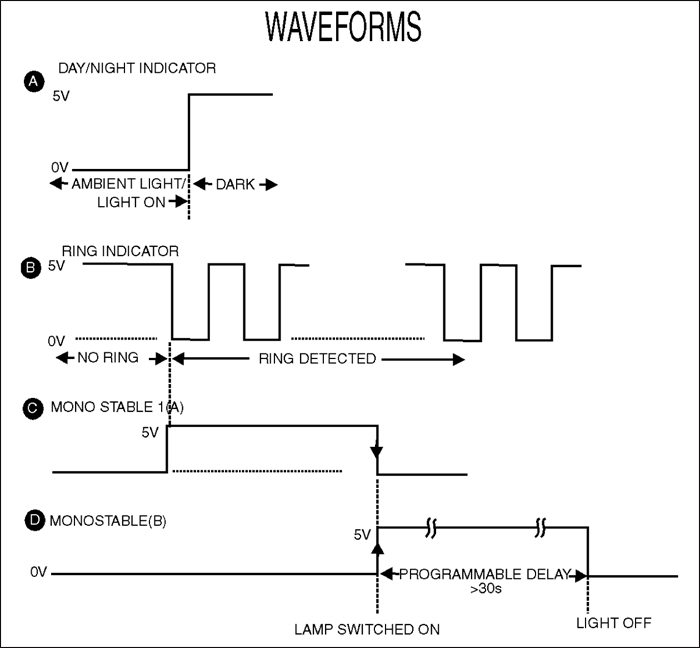 The 74LS123 retriggerable monostable multivibrator IC is used to generate a programmable pulse-width. The first monostable 74LS123(A) generates a pulse from the trigger input available during ringing, provided its pin 2 input (marked B) is logic high (i.e during darkness). It remains high for the programmed duration and switches back to 0V at the end of the pulse period.

This high-to-low transition (trailing edge) is used to trigger the second monostable flip-flop 74LS123(B) in the same package same package. Output of the second monostable is used to control a relay. The lamp being controlled via the N/O contacts of the relay gets switched ‘on.’ The ‘on’ period can be extended by simply pressing push button switch S1. If nobody attends the phone, the light turns off automatically after the specific time period equal to the pulse-width of the second flip-flop.

The light sensitivity of LDR can be changed by changing resistance R2 connected at collector of the transistor in light monitor circuit. Similarly, switch-on period of the lamp can be controlled by changing capacitor C3’s value in the second 74123(B) monostable circuit.