This project is based on an infrared (IR) sensor, which detects the presence of hands and consequently activates the motor pump to dispense alcohol-based sanitiser. The circuit is economical, reliable, and can be easily constructed, as explained below.

The block diagram of IR based automatic hand sanitiser dispenser is shown in Fig. 1, and its circuit diagram is shown in Fig. 2. It consists of an IR sensor module (IR1), transistor BC547 (T1), 5V single-changeover relay (RL1), diode 1N4007(D1), LED1, mini submersible DC motor pump, and a few other components.

The project uses 5V DC to drive the circuit. When the IR sensor detects a hand, its output goes high. This high output drives relay driver transistor (BC547) and energises relay RL1. Submersible DC pump gets power supply through NO contacts of the relay. This turns on the DC pump, and hand sanitiser liquid starts to flow out of the small plastic pipe fitted on the bottle.

When there is no hand or object in front of the IR sensor, its output goes low. This low output cuts off relay driver transistor (BC547) and de-energises relay. When the submersible pump disconnects from the power supply, the DC pump goes off, which stops the flow of hand sanitiser.

You can use a 5V DC adaptor to operate the circuit. Assemble the circuit on a general-purpose PCB and enclose it in a suitable cabinet. Attach the IR sensor module on the front of the dispenser bottle. The proposed construction details are explained here:

Switch on the circuit and keep your hands in front of the IR sensor module. Sanitiser fluid will flow out and continue to flow out until your hands are withdrawn from the sensor.

You need to cover the IR module with suitable insulation and water-proof material so that it would not get damaged in case liquid falls on the module. The IR sensor detects hand at a distance in the range between 2~30cm. You can manually calibrate the sensitivity using an inbuilt potentiometer on the IR module. 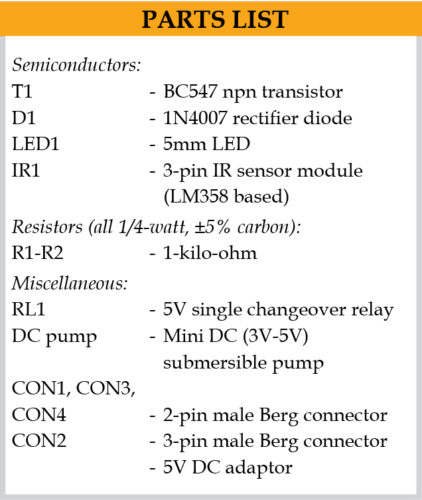 The IR module tends to get activated by itself when kept in open sunlight and sometimes even under tubelight inside a room. It is recommended to use a suitable contraption or enclosure for the IR module to prevent false triggering by ambient light.