Infrared (IR) remote-controlled RGB bulbs available in the market are extremely expensive. Here is a simple, easy-to-build and inexpensive circuit built using Arduino Uno R3. The project demonstrates how to turn on/off or vary the colours of an RGB LED bulb using an IR remote (used for televisions, air-conditioners, set-top boxes and so on). The author’s prototype is shown in Fig. 1.

MP3 Vire IR remote has many buttons, including digit buttons (0 to 9), volume control, forward/reverse, play/pause and so on. The eight buttons and their functions used in this project are given in Table I. 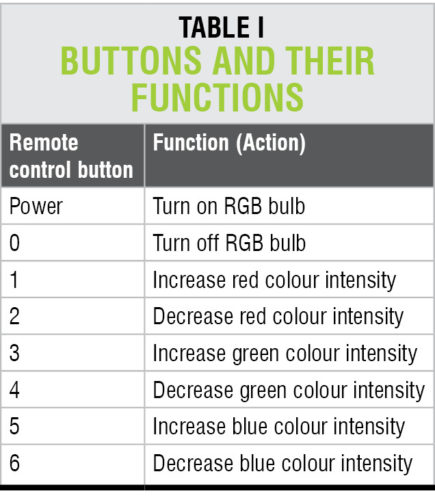 Next, decode the codes for these buttons. When a button is pressed, the corresponding code transmits through its internal IR LED of the remote. To decode this code, IR remote functions and IR remote library for Arduino are used. These libraries are readily available on the Internet. Download the libraries and include in Arduino Libraries folder.

Compile the code/sketch (rgb_vire_remote.ino) and upload it to Arduino microcontroller (MCU). Connect IR sensor as shown in the circuit diagram. Point the remote control towards IR sensor and press the corresponding button, as per the details given in Table I.

Open serial monitor of Arduino to observe the code of each button being pressed in the form of numbers as listed in Table II. Note down the code for each button. 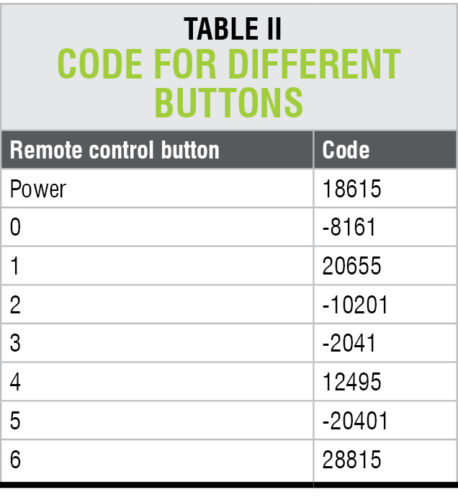 Circuit operation is done using the software program loaded in the internal memory of Arduino Uno R3. The program is written in Arduino programming language. Arduino IDE 1.6.4 is used to compile and upload the program.

ATmega328P on Arduino Uno comes with a pre-programmed boot loader. It allows you to upload a new code to it without using an external hardware programmer.

The program/sketch (rgb_vire_remote.ino ) is the heart of the system and carries out all major functions. In this project, IRremote.h header files are required for programming. You may download the same from GitHub website (https://github.com/z3t0/Arduino-IRremote).

A PCB layout of the IR remote-controlled RGB bulb is shown in Fig. 5 and its components layout in Fig. 6. Assemble the components on the PCB as per the circuit diagram. Mount RGB1 on the PCB.

When Power button on the remote is pressed, it turns on RGB1 bulb. Power and 0 buttons on the remote are used to turn on and off RGB1, respectively. Message ‘RGB bulb on’ or ‘RGB bulb off’ is also displayed on Arduino’s serial monitor.

Here, a 9V battery is used as power supply for Arduino Uno R3.