Digital compass and protractor are two of the most basic tools for specifying directions and measuring angles. But sometimes it is difficult to get accurate angle measurement for certain structures and geometrical shapes using these traditional tools, for example, the angle between two adjacent walls.

For this project, we need the following components:

Arduino Pro Mini connection details with the components are given under Table 1. 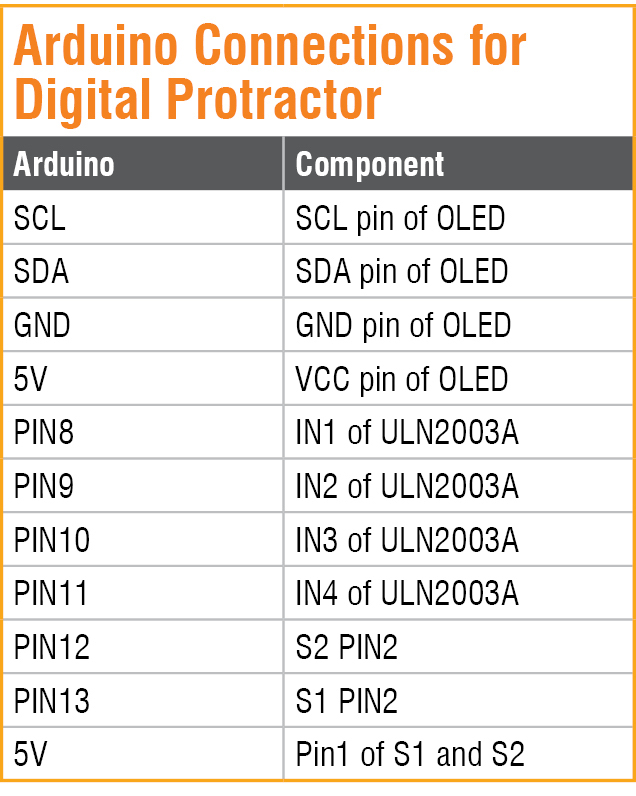 The firmware (digital_protractor.ino) for this project is written in Arduino programming language. First, add relevant software library to Arduino IDE from Include Library as shown in Fig. 2.

Install the ‘28BYJ_48’ libraries as shown in Fig. 3. After the successful installation of the required libraries, start Arduino coding.

Include stepper motor libraries and declare the variables needed to store different values as shown in Fig. 4. After this create a setup ( ) function, which is shown in Fig. 5.

Next, create a loop function and include ‘if ( ) condition’ to check the state of the pushbutton. When if ( ) condition in code says true, stepper motor moves one step and stays there until the condition turns false (which happens when the switch is not pressed).

To measure the angle, calculate the steps moved by the motor. To do so, I have created a step variable that will store the previous value of stepper motor and go on adding one by one as the motor moves. Are you confused? Let me explain it in simple words.

This is how the steps of motor are calculated.

After this, we need to convert the steps of motor into angle by using a map ( ) function.
map (min steps, max step, min angle,
max angle)

The magic happens here! When we put this code in loop function, the steps automatically get converted into angle.

Double check all the circuit connections, as any mistake might fry your costly components. Then power on the Arduino board and ULN2003A motor driver module. Press switch S1. As the needle starts moving clockwise, the angle moved with respect to the reference line is shown on the OLED display. If you press switch S2, the stepper motor will start moving in opposite direction, and angle value shall start decreasing, which can be seen on the OLED display.

This protractor is more useful for measuring the angle between adjacent walls and solid structures, links and joints as it is very hard to put a conventional measuring device in such places.

Ashwini Kumar Sinha is an electronics enthusiast and tech journalist at EFYi.

This article was first published online on 15 April 2020 and can be accessed here.