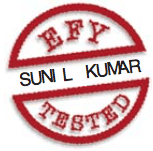 The tuning of a frequency modulated (FM) receiver to a FM radio station frequency involves a lot of ‘hissing’ noise in between the stations, which is very irritating for the operator and as such undesirable. Digital FM receivers are free from this problem, because in them the output is automatically clipped during off-station gaps. However, digital FM receivers are comparatively much costlier than their analogue counterparts.

Analogue FM receivers employ an LC tuning system that generates ‘hiss’ noise at the output, which remains unclipped during off-station tuning. However, when the received signal level is adequate (i.e., when the receiver frequency is very close to an FM transmitting station frequency), the limiter circuit preceding the ratio detector circuit in an analogue FM receiver will clip/limit any noise riding the FM carrier.

The noise muting FM receiver circuit has been configured around a Sony CXA1619S AM/FM receiver chip, which is available in a 30-pin PDIP package. Sony FM receiver chips are known for their superior features and cost-effectiveness. The functional block diagram of the chip is shown in Fig. 1.

A complete circuit of the FM receiver including the muting circuit and power supply is shown in Fig. 3. Most of the FM kits available in the market also make use of Sony CXA1619S, which is a complete AM/FM receiver IC with very few external components. It can operate at voltages as low as 3V. Here, we have used a 6V supply so that we can feed the output of the receiver directly to a 32-ohm headphone or to a low-power AF amplifier built around IC LM386. A 3-pin jumper has been provided to enable the desired selection.

The muting circuit makes use of the tuning meter output at pin 20 of CXA1619S. The internal circuit around pin 20 of the chip is shown in Fig. 2. Normally, this pin is used for tuning indication using a light-emitting diode (LED). The cathode of the tuning indicator LED is connected to pin 20, while the anode of the LED is connected to positive supply through a current limiting resistor.

When the receiver is tuned to the centre of FM carrier, pin 20 of CXA1619 goes very low and the LED lights up the brightest.

Instead of connecting an LED, we have coupled pin 20 of CXA1619S to the input of a CMOS inverter gate via diode D1. In ‘off’ tuning condition (when the receiver is not tuned to any FM station), input pin 1 of CMOS inverter gate N1 (1/6 CD40106) is biased to 2/Vcc using a potmeter arrangement comprising resistors R6 (33 kilo-ohms) and R7 (68 kilo-ohms). Thus, in between the FM stations, output pin 2 of the inverter gate remains low and therefore transistor T1 (BC548) remains cut off and the 5V inverter relay connected at its collector remains de-energised.

However, when the receiver is tuned to an FM station, its output pin 20, as also input pin 1 of the CMOS inverter gate, go low. As a result, the output of the inverter gate goes high to energise the relay via transistor T1.

The audio output from CXA1619S, available at its pin 28, is passed via 100µF capacitor C12 and the contacts of reed relay to either the headphones or the AF amplifier circuit only when the relay is energised, which happens only when the receiver is tuned to the carrier frequency of an FM station. Thus the annoying noise output of the receiver during ‘off’ station tuning is not heard in the headphones or the loudspeaker. In other words, the circuit configured around the CMOS inverter gate acts to mute the noise output when the receiver is not tuned to any FM transmitting station.

The supply voltage for inverter gate N1 (IC3), transistor T1 and the FM receiver chip/kit has been derived from the output of IC 7806 so that a regulated voltage is maintained across the entire circuit. Alternatively, in the event of mains failure, and for portable applications, four 1.5V cells may be used. Diode D3 in the power supply circuit ensures that when mains is available, the battery output remains isolated/not used.

For antenna, you may use either a 75cm telescopic antenna or simply a wire of similar length.