The IC is available in different packages having 16 pin, 8 pin or 6 pin configurations. Since we will not be using most of the control pins and go by their defaults, we have used the 6 pin version. The pin-out is shown in figure 4.

Settings available for this package are:

Prebuilt modules built around this single touch pad detector IC TTP223 have been used in this project. These modules are available easily on online portals. 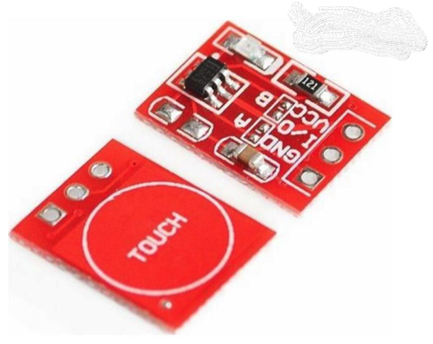 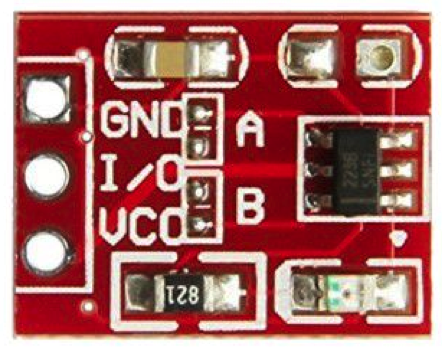 The circuit diagram of the module is shown in figure

The module has two pads (A and B) which can be shorted to change the behavior of the module. As the relay module used has active low inputs, the following settings have been used

In the current project we have built a panel of four “touch” switches, three of which function like normal on/off switches while the fourth works as a momentary switch (bell switch). The onboard LEDs have been removed as they glow when the output is in the low state (which indicates the “off” position in our case) and replaced with external 3mm LEDs to show the “on” state.

In practice, I found it very difficult to short the pads A and B with solder, but found shorting pin 4 or 6 to pin 5 easier.

The connection diagram of the panel is shown in figure

A suggested layout of the panel is shown at figure

The modules were stuck to the underside of the acrylic sheet using hot glue. The relay board and 5volt power supply module were accommodated inside the switch box. The external lights and bell were connected to the relays.

The number of touch pads can be increased/decreased depending on the number of switches required. The TTP223 IC can handle voltages between 2.0V to 5.5V and power supply should not exceed 5.5 volts.

To make the switchboard more attractive, the front panel can be built using two pieces of transparent 1.5mm thick acrylic sheets instead of one 3mm thick sheet. A paper with a printed pattern can be sandwiched between the two sheets to give it a professional look.

Photos of the completed unit