Presented here is a simple rotation counter which helps you measure the revolutions per minute (rpm) of any rotating object. As the project requires measurement of very high rpm, a fast-switching device like a reed switch is used. A small round magnet is mounted on the blade as shown in Fig. 1 to activate the reed switch on each rotation. The circuit has been successfully tested up to 6000 rpm but it can measure even beyond that. 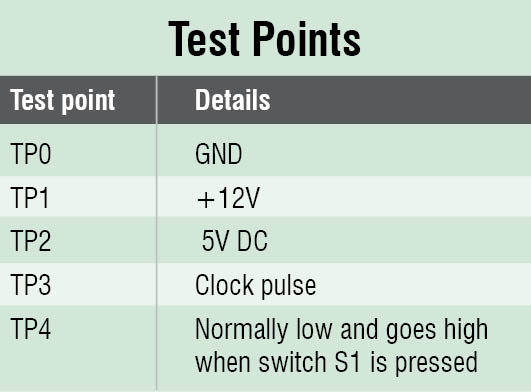 Opto-coupler IC2 is used to isolate the counter and provide a clock pulse to counter IC3. It counts a pulse when contacts of the reed switch touch each other due to the magnet that comes near it at each rotation. At each rotation, the magnet and reed switch face each other once and the contacts get closed, which causes LED in the opto-coupler to turn on and drive the transistor. This brings clock pulse equal to the number of rotations at the CLK pin 12 of 4-digit counter IC3. IC3 is used to count the clocks received by opto-coupler IC2 and display them on the four common-cathode 7-segment displays (DIS1-DIS4).

IC3 has a 4-digit counter, an internal output latch, npn output sourcing drivers for a 7-segment display and an internal multiplexing circuitry with four multiplexing outputs. The multiplexing circuit has its own free-running oscillator and does not require external clock. The counter advances on negative edge of the clock. A ‘high’ signal on display select (DS) input selects the number in the counter to be displayed; a low level signal on the DS selects the number in the output latch to be displayed.

A maximum of 9999 digits can be counted and shown on DIS1 through DIS4. A high signal at reset pin 13 of IC3 turns all the outputs to zero. So the display shows 0000 when you press the reset switch S2 momentarily.

The power supply used for the circuit is 5V, which is derived from a 12V battery whose voltage is reduced through regulator IC1 to produce 5V regulated power supply. Alternatively, you can use a 12V adaptor for powering the circuit when a battery is not available.

Working of the circuit is simple. To count rotations of any rotating object, fix the magnet on the rotating part and rest of the circuit on the stationary part such that the magnet passes close to the reed switch at each rotation. Now press reset switch S2 momentarily. The display shows 0000. Switch on the motor and note the displayed reading after one minute to see the rpm. 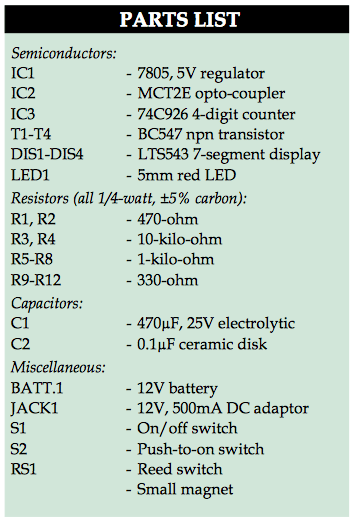 A single-side PCB for the rotation counter is shown in Fig. 3 and its component layout in Fig. 4. After assembling the circuit on PCB, enclose it in a suitable plastic case. After all the components are soldered on the PCB, connect the two wires coming from the reed switch to the main unit.

To check the circuit for proper functioning, verify 12V supply at TP1 and 5V at TP2, with respect to TP0. The clock pulses corresponding to the rotation can be varified at TP3. The reset to the circuit can be observed at TP4. Power LED1 should glow when connected to power supply.

The author holds a diploma in electronics and telecommunications from IERT Allahabad and is a graduate from Kanpur University. He is a lab engineer at EFY