Presented here is an Arduino-based dish antenna angle controller to align the position of a satellite dish antenna by setting azimuth and elevation angles. The dish antenna should always point to a specific satellite in space to receive maximum signal. Even a slight deviation from the point may reduce signal strength.

Azimuth and elevation angles are set using input switches, as explained in the next section. Once these values are set, the dish antenna automatically moves in vertical and horizontal directions with the help of two DC geared motors.

Fig. 1 shows the diagram of the antenna system along with the positions of azimuth (AZ axis) and elevation motors (EL axis).

The whole circuit works on 5V DC supply. Arduino Uno can be given 5V regulated supply on its 5V pin. A separate 12V supply is given to pin 8 of L293D for the motor supply.

Fig. 3 shows the proposed satellite dish antenna mounting system for a demonstration model. There are two DC geared motors rated at 12V DC with 10rpm speed. The motor that rotates the dish antenna in horizontal plane is azimuth motor 1 (AZ motor or M1), and the one that rotates it in vertical plane is elevation motor 2 (EL motor or M2).

Two opto-interrupter sensors (MOC7811) are used to provide feedback of motor angular positions. Encoding wheels are attached to the shaft of each motor. Each encoding wheel has holes (say, 6mm dia) at 10°, 20°, 30° and so on, up to 350°. The arrangement is done in such a way that, as the motor rotates, the wheel also rotates and its holes pass through the slotted gap of MOC7811 sensor. Interruption of IR light by each hole generates one pulse per 10° of motor rotation. The proposed arrangement of the mechanical assembly is explained step-by-step below. 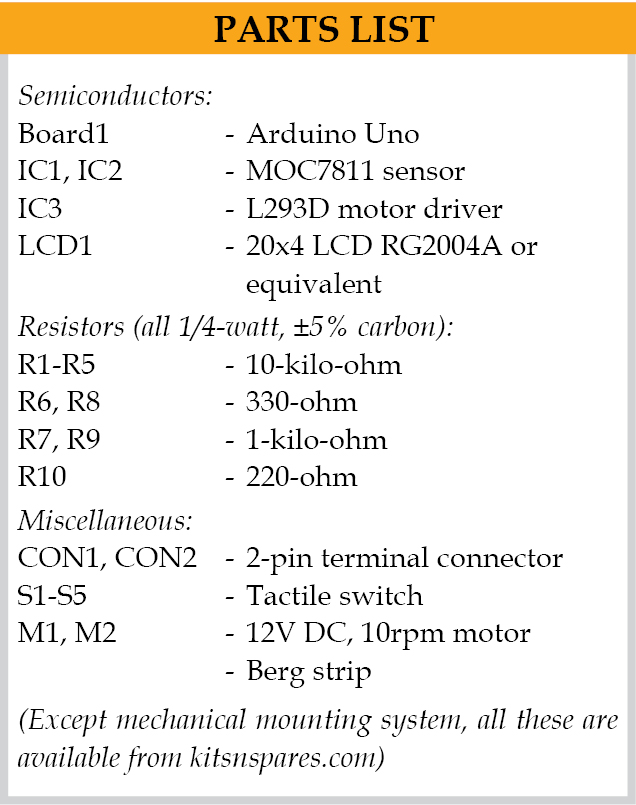 Initially, set the angles of both the motors to 0°. This means, the dish antenna has a 0° azimuth angle and 0° elevation angle. Azimuth angle can be set from 0° to 350° in steps of 10° using pushbutton switches S1 and S2.

When both angles are set, press start pushbutton S5 to rotate the dish antenna. Automatically, azimuth motor 1 will start rotating to set the dish antenna in azimuth angle. As AZ motor 1 rotates, encoding wheel 1 will also rotate and its holes will pass through the gap of sensor 1.

Next, elevation motor 2 will start rotating automatically. It will rotate the dish antenna as well as elevation encoding wheel 2 till set angle is reached.

After setting the angles, press S5. Motor 1 will rotate, followed by motor 2. LCD1 will display the values of azimuth and elevation angles. When the dish antenna attains the desired position, LCD1 will show the set dish position.

Ashutosh M. Bhatt is M.Tech in embedded systems. Currently, he is lecturer of electronics and radio engineering at Government Polytechnic, Jamnagar, Gujarat.