Traditional key-based locks are now outdated and come with limitations of their own. First, you always have to carry the key with you, and the key might get misplaced or stolen. Such locks are not completely secure either.

First, write a program (biometric_lock.ino) in Arduino IDE that enables you to connect your smartphone with the lock and perform the task(s) according to the code. For that, create a string variable that stores the unique device ID for the lock; then, include the servo library in your code.

Next, set serial baud rate to 9600 for HC-05 Bluetooth communication. You can change the baud rate if you are using a different Bluetooth module. Now, define the pin for the servo motor that you will use. Refer the code given in Fig. 1.

But if the app reads a wrong fingerprint, the servo remains in lock position. Refer Fig. 2 for details.

There are many tools available for developing the Android app, including Android Studio, Kodular and MIT App Inventor. We have used Kodular. It has different code blocks through which you can make the app with different combinations of these blocks. It is easy and saves time during coding.

Open any Web browser and search for Kodular. To start making the app, open Kodular and add the following components in the layout (Fig. 3):

Connect components to Arduino board as given in Table 2 and shown in Fig. 5. 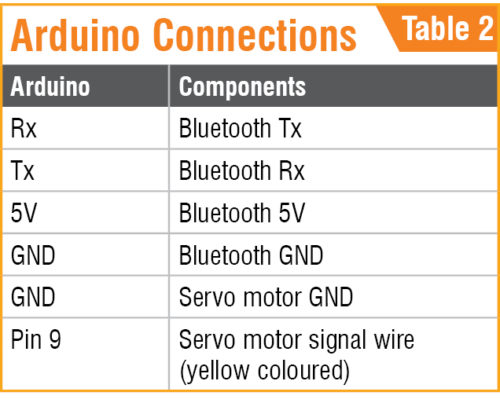 Interfacing the circuit with the lock

Step 1. Get a suitable lock from the hardware store.

Step 2. Open the cover of the lock and you will be able to see the lever, as shown in Fig. 7.

Step 3. Attach one of the servo motor fins to lever of the lock, as shown in Fig. 8.

Now, put back the cover of the lock to close it. Extend three wires of the servo from the lock to the circuit. Make sure all wires are connected to appropriate points in the circuit.
Testing

After touching the fingerprint icon, you will get a dialogue box on the screen asking you to unlock using your fingerprint (Fig. 11). Touch the fingerprint sensor, which is normally at the back of the smartphone. If it is the correct finger, the servo will rotate to turn the lock on, and at the same time the locked icon will change to unlocked icon.

If fingerprint does not match, the lock will remain in locked position. The dialogue box will give error message as “Fingerprint not recognised” (Fig. 12).