Presented here is a simple circuit that will help you figure out whether a transistor is npn or pnp type. If the transistor under test is npn, red LED will blink. If it is pnp, green LED will blink. This circuit is highly useful for small labs where components lie on the desk unidentified after a project is done and it is very tedious to read the part number printed on the component and identify it from its datasheet. The circuit provides a straightforward method for identification of bipolar transistors.

As shown in Fig. 1, transistor polarity checker circuit is built around quad 2-input NAND gate CD4011 (IC1), four diodes (D1 through D4) and a few discrete components. It works off 9V supply, and a PP3 battery is recommended for compactness of the unit.

A rectangular oscillator is made using gates N3 and N4, which is further connected to N1. The output of N1 is connected to the input of N2. Like this, you get square waves at the outputs of N1 and N2 that are 180 degrees out of phase. 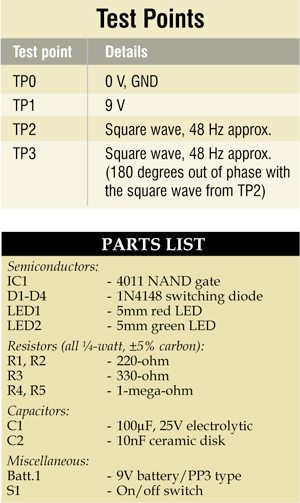 Construction and testing
An actual-size, single-side PCB for transistor polarity checker is shown in Fig. 2 and its component layout in Fig. 3. Assemble the circuit on the PCB to avoid assembly errors. After construction, enclose the whole circuit in a suitable, small box. Connect a three-pin socket for inserting the transistors to be tested.

To test the circuit for proper functioning, check correct power supply at TP1 with respect to TP0. Check the waveforms at TP2 and TP3 as mentioned in the test points table.

The author is a regular contributor to EFY. He has many articles published to his credit in India and abroad