If you’re still using traditional keyed locks, then you must be always worrying about losing the key or somebody breaking into your house. With traditional locks, there is higher risk of keys being misplaced or getting into the wrong hands. As a result, many people are now opting for modern biometric locks to enhance the security of their houses. Unlike the traditional lock, a modern biometric lock requires no key to lock or unlock the door. You no longer need to carry a bunch of keys wherever you go, as you just have to use your fingerprint to unlock/lock the door. But as these smart locks are made using biometric sensors, they come with heavy price tags. 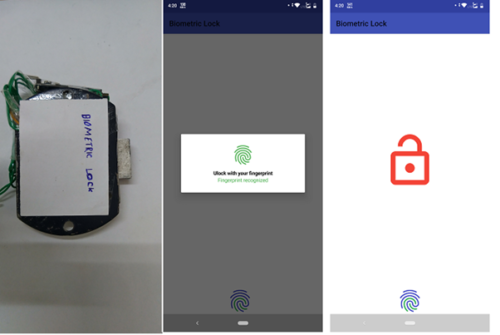 This DIY project will help you to build a low-cost biometric lock. We all have biometric fingerprint sensor in our smart phones. Today, I’m going to use this sensor to make a prototype of biometric lock at just Rs 850.

Before starting this project first gather these components: –

First of all, we will create a program in Arduino IDE and upload it on Arduino development board. This Arduino program will help create communication between our smartphone and Arduino over Bluetooth. This will enable it to check commands coming from smartphone to perform tasks.

After this, we will create a loop function to store the device ID sent by the Bluetooth in “reads” string. After that we have to create an ‘if condition’ for checking the device ID sent from the Bluetooth. If the fingerprint matches in android app then that app sends the device ID to Arduino. And if this ID matches with the one set in Arduino then the servo motor moves to unlock position.

If the Bluetooth reads the wrong fingerprint, then it automatically turns the servo to lock position. (Refer Fig .3)

We can make app in two different ways – one in Android Studio and other in Kodular. In this project, we are going to use Kodular, which basically have different code blocks. You can make an app by combining these blocks. It is easy and saves time in coding. But for the developers who love coding, they can use Android studio. You can ask me in the comment section if you want me to make an app using android studio as well.

Use any web browser and open Kodular website to start making app.

First, we add the following components in layout for app: – 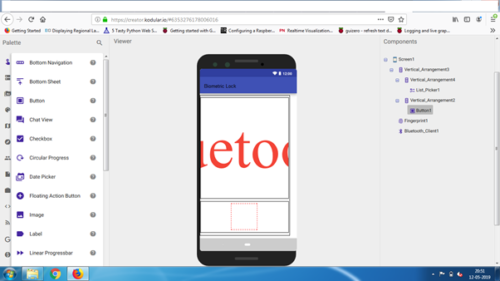 After that join the code blocks as shown in the picture below. Then export the .apk to your PC and install that app in your phone.

As we have completed our app and uploaded the code to Arduino. Now let’s connect the components as illustrated below.

Next, follow the steps as given in pic to prepare the lock for biometric locking system.

Step 1. Get any broken lock from the market or from any hardware shop.

Step 2.Now attach the servo motor moving shaft to the lever of the lock as shown in pic below

Step 3.Then close the cover of the lock and connect all electronics components as illustrated in connection section.

Now, power the lock and servo with 5-6 V battery and then open the app that we have created.

If you give wrong fingerprint then the lock moves back to its locking position ( Refer Fig 11.)

You can download the code from the link below