Everyone has been raving about Apple’s tablet PC iPad—a complete entertainment package. Add an extra power, better display and video/graphic performance, you’ll get Adam. This Android-based tablet PC, developed by Hyderabad-based Notion Ink, promises to give Apple a run for its money in the tablet PC market -- VANISHA JOSEPH

JUNE 2010: Tablet PCs are the new buzz in the market. Be it for watching TV, reading a book or playing video games, the tablet PCs available in the market help you do it all.

Let’s elevate the experience further. Imagine a tablet PC with a screen that works like a normal screen indoors and adjusts itself into a paper display when outside, reducing the strain on your eyes. Or a tablet PC that runs at a stretch for eight hours, letting you watch a crucial one-day cricket match despite the electricity outage. It would sure be a dream-come-true gadget. Hyderabad-based Notion Ink, powered by the brains of six IITians and one MBA graduate, has made this dream a reality with its Android-based tablet PC, Adam. 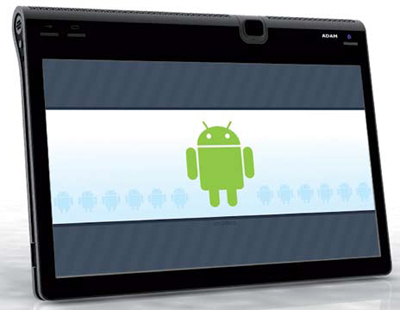 “Adam is a revolutionary product integrating the best possible technologies today. It is based on Android, Google’s operating system, which by the dint of being open source opens a lot of possibilities for developers around the world to create the best applications. In short, Adam combines the power of a netbook, e-book reader and smart phone. It is sure to redefine the concept of mobility and usability,” says Rohan Shravan, director and CEO, Notion Ink Design Labs.

Cool technology
Having filed a couple of patents including one patent on the unique swivel camera and back trackpad, Adam sports cool technologies.

Soothing to the eye. The Pixel Qi display powering Adam has a faster refresh rate and uses fully saturated colours. It provides two modes, one emits light and the other requires ambient light.

“We use sensors to control the lighting mechanism, which gives a feel of constant brightness, without which users will have to keep on switching between the different modes, and manually control the brightness. This feature makes it a good reading tool for indoors and outdoors. Now, you can sit back and enjoy,” says Shravan. iPad, on the other hand, doesn’t have any hardware switch to adjust brightness of the screen for ambient light conditions.

The Pixel Qi display is also very power-efficient, with half to one-fourth the power consumption of LCD screens used by competing products like iPad.

Long battery life. Adam allows 48 hours of standby, eight hours of 1080p HD video playback and 16 hours of Wi-Fi Internet surfing. The nVidia Tegra system-on-chip processors enable Adam to have days of battery back-up. “These ARM processors have nine different cores and are based on the technology where all other cores are in sleep mode when one core is performing, enabling minimal power wastage,” elaborates Shravan. “The processor is two-three times power efficient, providing a backup probably better than any other device,” adds Shravan.

Better camera and track pad. The 3.2-megapixel camera is capable of standard video and image capture. Swivel function allows it to act as both front and back camera. The built-in track pad at the back of Adam gives you more options to control the cursor or functions of the tablet PC.

The power of Android. Today, numerous devices are based on Android. Adam is the new chip on the Android block. But how has Android helped Adam? “We used Android as it is tweakable to the core, opening possibilities for developments. Moreover, we believe in giving back to the society and Android serves the best purpose by inviting anybody and everybody to create whatever is best suited for them,” says Shravan.

“Today, users seek ease instead of availability and performance instead of processing. Keeping that in mind, we wanted to abandon drop-down menus and folder hierarchies and deliver our own set of office applications which will be simpler and faster. Android makes this possible,” adds Shravan.[stextbox id=”info” caption=”Road to Android gadget”]

Starting to build the Adam dream in 2008, Notion Ink took one year to come up with the design, requirements and proposed technologies to make the device a reality. “We worked with National Institute of Design, Research and Development Campus at Bengaluru, to come up with the user understanding, elements of the next-generation operating system, user interface and product concept. After six months of core research, we got what we wanted. For hardware, we collaborated with industry leaders in the US and Taiwan. We got into business collaboration with nVidia for their next-generation Tegra processors. For the touch screens, we went for TPK,” says Shravan.

And like for all startups, the path for Notion Ink too wasn’t easy. Finding engineering talent was a huge challenge. “India doesn’t have people working on Android. Those who do, charge Rs 100,000 per resource per month,” says Shravan, who decided to train engineers from scratch to overcome this hurdle. The company trained engineers from BVRIT in Bachupally, Hyderabad.

Further, they had to be ready to face tough competition from other players in the market. The company is working on application store platform of its own, to ensure that its users get the best variety of content and it is able to compete with other players. “We have the necessary collaborations in place, which will make the availability of content lot easier, be it digital books, songs, movies, applications or even media content,” says Shravan.