Toposens Echo One is a 3D Ultrasonic Echolocation Sensor which can be used for collision avoidance. It is the world’s first industrial-grade 3D Ultrasonic Collision Avoidance Sensor. The sensor employs 3 microphones to detect sound waves. The sensor sends the data to Toposens PROCESSING UNIT, which uses sound-based triangulation combined with sophisticated noise-filtering software to detect any obstacle. 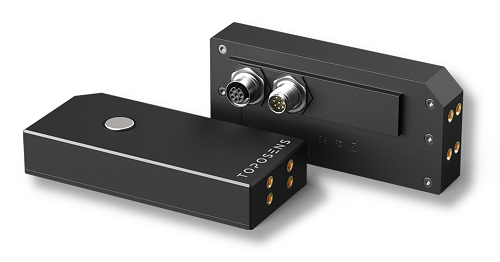 The 3D Ultrasonic Echolocation Sensor is based on the principle of echolocation as seen in bats, Toposens ECHO ONE compensates for the drawbacks of optical sensors by using sound-based triangulation in combination. It sends the data obtained from 3 microphones, in a 3D point cloud format to the Toposens PROCESSING UNIT which is equipped with easy-to-configure advanced 3D collision avoidance software. From there, depending on which 3D zone violations are detected, the Toposens PROCESSING UNIT triggers either a “slow down” or “stop” command to the mobile robot’s CPU. When no zone violations are detected, the mobile robot drives on.

“Being able to detect multiple difficult-to-detect obstacles reliably and in real-time, regardless of environmental conditions, enables us to provide next-level robotic safety for our customers. Our technology addresses the shortcomings of optical sensors, such as LiDARs, which can fail to detect floor-based objects like forklift forks on the floor, in unfavourable lighting conditions or on transparent or mirrored object surfaces. Receiving data output in 3D, meaning in x, y, and z coordinates, guarantees the most reliable level of 3D collision avoidance”, says Tobias Bahnemann, CEO and Co-Founder of Toposens and continues: