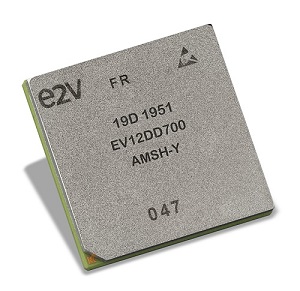 Teledyne e2v has announced the expansion of its digital-to-analogue converter (DAC) IC portfolio, which will also be accompanied by an evaluation platform. With the availability of EV12DD700 dual-channel DACs, operations up into Ka-band frequencies can be performed, especially mission-critical microwave systems as these devices support beamforming applications

The EV12DD700 has a 25GHz output bandwidth with only 3dB attenuation (can perform way beyond this with just a little over 3dB attenuation). Built into each DAC is an array of sophisticated signal processing functionality, which comprises of a programmable anti-sinc filter and direct digital synthesis (DDS) capabilities, as well as a programmable complex mixer. Also included is a digital up-converter (with four interpolation stages, plus sinc compensation).

With the help of the EV12DD700 evaluation kit, engineers will now be able to investigate the key operational parameters of the 12.5GSamples/s EV12DD700. This means that they can assess its validity for their particular design criteria much sooner.

“There is a growing need to migrate RF systems from being heavily hardware dependent to following a more software-centric structure, thereby making them much easier and quicker to configure. It’s now becoming clear that the Ka-band is going to be where much of this activity occurs,” states Nicolas Chantier, Marketing Director at Teledyne e2V Semiconductors. “Through the EV12DD700, and its support for higher frequency levels, it will be possible for engineers to replace a much larger proportion of RF hardware with digital code, and our evaluation kit will give them a useful head-start.”

The full production release of the EV12DD700 will be later this year.