ROHM has added new MOSFETs to its existing PrestoMOS lineup of 600V Super Junction MOSFETs. The R60xxVNx series provides a low on-resistance along with one of the fastest reverse recovery times amongst all the competing solutions. The MOSFET series is optimized for power circuits in industrial equipment requiring high power, such as servers, EV charging, motor drives, etc.

According to the company, the move towards a carbon-neutral world has forced us to become more energy-efficient, demanding power semiconductors to further reduce power loss. To meet the expectations, the R60xxVNx series adopts the latest proprietary processes to achieve the industry’s fastest reverse recovery time while reducing ON resistance (which is in a trade-off relationship) by up to 20% compared to equivalent products. 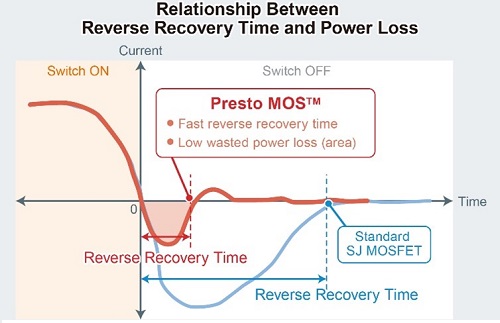 The company claims that the reverse recovery time of the new Super Junction MOSFETs is just 105ns, which makes it possible to reduce switching loss by approximately 17% compared to other solutions, these two features enhance the efficiency in various applications. The ROHM’s R60xxVNx series utilizes proprietary high-speed technology to achieve a fast recovery time while maintaining lower ON resistance compared to equivalent TO-220FM package products. This allows eliminating wastage of current, thus, reduction of power loss during switching. Furthermore, standard types such as the R60xxYNx series are offered that feature trr in the 300 to 400ns range at the same ON resistance.