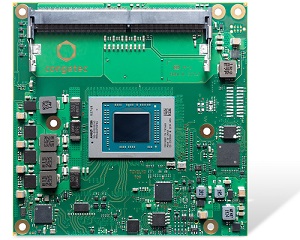 congatec has introduced the conga-TCV2, a brand new COM Express Compact Computer-on-Module based on AMD Ryzen Embedded V2000 processors. With double the performance compared to the earlier launched AMD Ryzen Embedded V1000, the module is setting a new performance per watt benchmark, which finds its sweetest spot in 15 Watt TDP designs.

This extraordinary low power platform performance has been validated using real-world cross-platform test suite Cinebench R15 nt. Compared to modules with AMD Ryzen Embedded V1608B processors, conga-TCV2 modules deliver a performance plus of 97% (V2516) to 140% (V2718) with up to 8 cores. Due to the new 7nm Zen 2 cores, single-core performance also increased between 25% and 35%, making the new modules a perfect candidate for performance improvements in 24×7 connected and fanless embedded systems operating at the various industrial edges.

With up to 40% more GPU capabilities for up to 4x 4k60 graphics at 15 Watt and comprehensive GPGPU support, multi-headed medical imaging systems in the operating theatre as well machine vision and machine learning systems are further target markets.

“While the new AMD Ryzen Embedded V2000 processor enhancements can be utilised in actively cooled systems with 54 Watt TDP, we see a significant number of customers with fanless and passively cooled systems operating at 15 Watt TDP or even lower. The goal to operate under such tight constraints is to enable highly rugged, sealed systems for reliable 24×7 operation in harsh environments. In those applications performance per watt improvements are welcomed with open arms and the Zen 2 x86 CPU and the AMD Radeon graphics cores offer extraordinary scores in this area,” explains Martin Danzer, Director of Product Management at congatec.

Next to stationary equipment, solar-powered stationary, mobile and autonomous systems also welcome the low power values of the new AMD Ryzen Embedded V2000 processor-based Computer-on-Modules, which can be configured down to as low as 10 Watt cTDP. This is significant because the productive operation time without re-charging extends the lower the TPD is. Competing 10 Watt TDP platforms with 4 cores offer only half the core count, which puts them into an entirely different, significantly weaker performance league.

Other 15 Watt TPD platforms also have just 4 cores but without the ability to scale down the TPD, which limits the platform balancing options. The AMD Ryzen V2000 Embedded processors, on the other hand, offer an ultra broad performance range from 10 Watt up to 54 Watt based on this single processor architecture.

The feature set in detail
The new conga-TCV2 high-performance COM Express Compact modules with Type 6 pinout are based on the latest AMD Ryzen Embedded V2000 multi-core processors and will become available in 4 different flavours:

These modules offer up to double the compute performance per watt and double the core count over previous generations. Thanks to symmetrical multiprocessing capabilities, they also provide particularly high parallel processing performance with up to 16 threads. The modules feature 4MB L2 cache, 8MB L3 cache, and up to 32GB energy-efficient and fast dual-channel 64-bit DDR4 memory with up to 3200 MT/s and ECC support for maximum data security. The integrated AMD Radeon graphics with up to 7 compute units continue to support applications and use cases that need high-performance graphics computing.

The conga-TCV2 Computer-on-Module supports up to four independent displays with up to 4k60 UHD resolution over 3x DisplayPort 1.4/HDMI 2.1 and 1x LVDS/eDP. Further performance-oriented interfaces include 1x PEG 3.0 x8 and 8x PCIe Gen 3 Lanes, 4x USB 3.1, up to 8x USB 2.0, up to 2x SATA Gen 3, 1x Gbit Ethernet, 8 GPOIs I/Os, SPI, LPC, as well as 2x legacy UART provided by the board controller.

The supported hypervisor and operating systems include RTS Hypervisor as well as Microsoft Windows 10, Linux/Yocto, Android Q and Wind River VxWorks. For safety-critical applications, the integrated AMD Secure Processor helps with hardware-accelerated encryption and decryption of RSA, SHA and AES. TPM support is onboard as well.