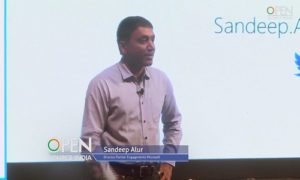 It was a pleasure to see Microsoft as one of the biggest proponents of Open Source at India’s leading Open Source event–Open Source India, which was held from 11th to 12th October 2018 at the NIMHANS Convention Centre, Bengaluru.

As the Platinum Partner, Microsoft was prominent both in terms of the size and engagement at its booth, as well as the number of experts from its teams that spoke at the conference.

One of the keynotes was delivered by Microsoft’s Sandeep Alur (director, partner engagements, Microsoft)., who had the audience wanting for more, when he spoke about the World of Ubiquitous Computing and Artificial Intelligence. Sandeep not only presented key tech trends related to AI, but also connected the dots with the open-source eco-system and the role Microsoft is playing.

In addition to Sandeep, other experts from Microsoft spoke on topics such as DevOps, HPC and Databases…

This statement sums up Microsoft’s perspective of “This is my third year at Open Source India. Every year I see more people coming in. The folks who come are those who truly believe in open source. There is no other conference that I have come across in the country that showcases open source software and conducts such an annual conference. I personally love this, especially because this is the one platform where I get to interact with so many people who are already in the open source world and want to understand from us what we do.”, said  Sandeep.
It seems, Open Source India enabled the Microsoft team to develop the right connect with Open Source developers.

Our Current Target Is To Have 300 Technologists In Our Bangalore...