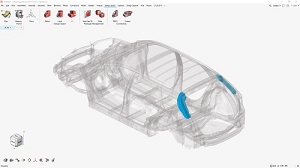 With the release of Altair’s 2021 simulation software update, users can now expect to experience new and enhanced features.

The electronic system design toolset enables engineers developing smart, connected devices to collaborate on all aspects of physical, logical, thermal, electrical and mechanical design. This accelerates a variety of applications, from more efficient printed circuit board (PCB) design review, verification, analysis and manufacture to the design of motors, sensors and actuators with simulation.

These updates help customers across a broad range of industries – from automotive and aerospace to energy, healthcare, and high tech – solve complex problems as they advance the development of their smart, connected products by leveraging 5G, electromagnetics and the Internet of Things.

All products are now available through Altair units. Additionally, the Altair Community contains a robust library of all the new features, workflows and enhancements included in the release.