Let us discuss the various types of explosions, their causes and precautions -- Dr S.S. VERMA

Life without electronic devices, like mobile phones, computers, laptops, tablets and video games, has become unimaginable, and now the use of electronics is expanding to several other fields, namely, automobiles, space and under-water vehicles. We have been hearing about incidents involving electronic devices encountering blasts. Let us discuss the various types of explosions, their causes and precautions

We often hear about battery explosions in laptops, mobile phones and other electronic gadgets. Having such gadgets with or around us might imply playing with a bomb waiting to explode.

Highlighting the occurrence of such blasts in electronic devices does not undermine their importance or use. It only makes people aware about such possibilities and the precautions that might be required to avoid such mishaps. It is important to understand the reasons behind these blasts in order to minimise damage. Electronic devices do not generally blast, but they may if we do not handle them properly.

Laptop explosion
In a laptop, the part that is most prone to an explosion is its battery. The smallest part of a battery is a cell. There are minimum three cells in a laptop battery and this number can go up to 12. The more the cells, the more backup for the laptop. More cells could also mean more time for a full charge. The explosion of laptop batteries will cause more damage as these contain more than one cell. If one cell is overheated and explodes, it will trigger a sequence of blasts, where each subsequent explosion would be more dangerous. The main reasons responsible for a laptop explosion are:

1. The most important reason for a laptop to explode is some sort of fault with the battery. To understand what could be the fault, we need to understand how the lithium-ion battery works. There are different types of batteries, of which the popular rechargeable ones are either acid based or lithium-ion batteries. We may find acid based batteries in vehicles. The lithium-ion batteries are more compact and have one electrode and one anode, with suspended electrons in the form of liquid. When using the laptop on battery, electrons flow from the negative side of cells to the positive side (contact points), thereby providing power to it. Similarly, when charging the battery, electrons are sent back to the electrode points to prepare the battery for consumption. Plenty of factors come into play here—over-charging, over-discharging and unwanted carbon build-up, among others. 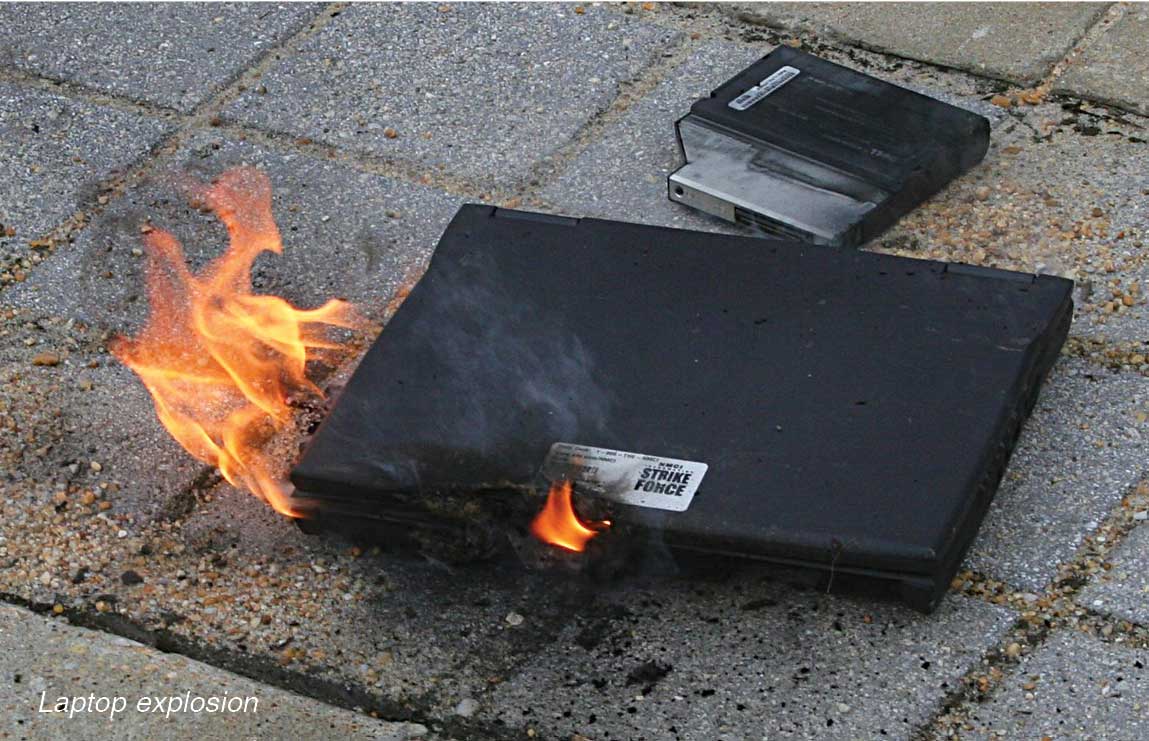 Even though a lithium battery looks simple from outside, it has built-in mechanisms to disconnect from the device and adjacent cells in case of over-charging or other such issues. However, a faulty laptop battery would not provide such mechanisms to protect the cells; these are missing one or more such precautionary mechanisms.

2. Another reason why a laptop battery may explode is mishandling. For instance, dropping it disturbs the alignment of the electrodes. This, in turn, changes the alignment of electrons in the cells, which may create overheating—a common reason for batteries to explode.

3. The atmosphere where the laptop is being used can also cause an explosion. For example, humidity may cause a short circuit, which, in turn, results in overheating and hence, explosion.

Precautions
Just like exploding pressure cookers, laptop batteries can also be dangerous. Our safety depends on how we use them. The only mantra to stay safe is to handle the electronic device with care. Precautions can be taken to make the use of laptops safe.

1. The obvious precaution for the prevention of a laptop-battery explosion is its proper maintenance. People tend to neglect batteries as these look low-maintenance and they assume these carry safe measures of voltage. But since their design is complicated, simple negligence, like dropping it, can trigger an explosion.

2. Do not keep a laptop plugged-in all the time. Though not an issue most of the times, it is best not to do it. To avoid the dangers of forgetting or leaving the laptop on without use for a long time, setting-up a hibernation time in a laptop is suggested so that it auto shuts down. When not using a laptop for a longer time, always remove the battery and store it in a dry place.

3. Using a power stabiliser between the laptop plug and mains is recommended. This way, at most the fuse will get damaged and the laptop will disconnect from the mains if a higher voltage burst comes along.

4. Older batteries tend to take in more power and can overheat in no time. Using an old and exhausted battery can be dangerous. Always replace a considerably old battery. Alternately, you can remove the battery and run the laptop on direct power supply. The health of a laptop battery can be checked with an easily available feature in software like Windows 7 and the use of battery-health checker or battery-maintenance software.