The LiDAR system enables AVs to detect small movements even at a large distance, which helps to accurately predict a pedestrian’s actions 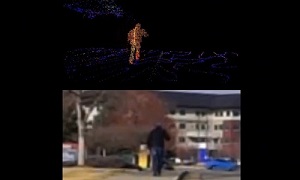 The Insight 1600 by Insight LiDAR is a LiDAR device that combines high resolution and velocity detection to enable pedestrian gesture recognition. The new capability can be used by autonomous vehicle (AV) perception teams to quickly and accurately predict the actions of pedestrians.

“When humans drive, we’re constantly scanning the environment around us. We’re watching for cars moving into our lane and looking at nearby pedestrians to see what they might do. For example, if a pedestrian looks both ways at an intersection, drivers understand that that person intends to cross the street,” said Greg Smolka, vice president of business development, Insight LiDAR.

According to Insight LiDAR Vice President Chris Wood, detecting these subtle pedestrian movements that convey intent is an important safety capability that has eluded AV developers until now.

“When we initially designed Insight 1600, we expected its ultra-high resolution and instantaneous low-velocity detection with every pixel to be critical in making vehicle decisions, especially regarding other vehicle movement,” Wood said. “However, we’ve been surprised by all the ways perception teams are using this critical information. From separating close objects and more accurately identifying distant ones to now predicting pedestrian movement, we’re seeing how important this data is to safe AV operation.”

Unlike most conventional LiDAR systems, the Insight 1600 offers a more sensitive technology to assess the environment. Known as Frequency Modulated Continuous Wave, or FMCW, this advanced LiDAR sensor technology utilises a low power continuous wave of light instead of high-power laser pulses to sense its environment. Much more sensitive than traditional LiDAR, this allows AVs to see objects much further away. The Insight 1600 also boasts a high resolution, 4-64x better than competitors. This ultra-high resolution, coupled with Insight’s highly sensitive FMCW architecture, detects enough pixels to enable AV software to not only detect but also identify small, low reflectivity objects at distances exceeding 200 m.

“What’s key here is both the quality and the amount of data the Insight 1600 generates. More data makes the AI easier and, ultimately, drives safety. As we drive, we’re all used to watching pedestrians to understand their intent. Now, for the first time, LiDAR can do the same thing,” said Michael Minneman, CEO of Insight LiDAR.

But abundant data isn’t the only thing needed for faster AV adoption. Cost and reliability are critical, too. For this, Insight LiDAR has used a combination of enabling technologies and patented techniques with Insight 1600. Utilising Photonic Integrated Circuits (PICs) and ASICs , Insight 1600 is based on a semiconductor architecture that can be scaled up for low-cost production in millions of units.