To solve this, ICT systems now integrate multiple test methods, where some points make contact through bed of nails and the others use edge connectors or JTAG ports or in-circuit emulators, thus using three or four test methods in parallel. 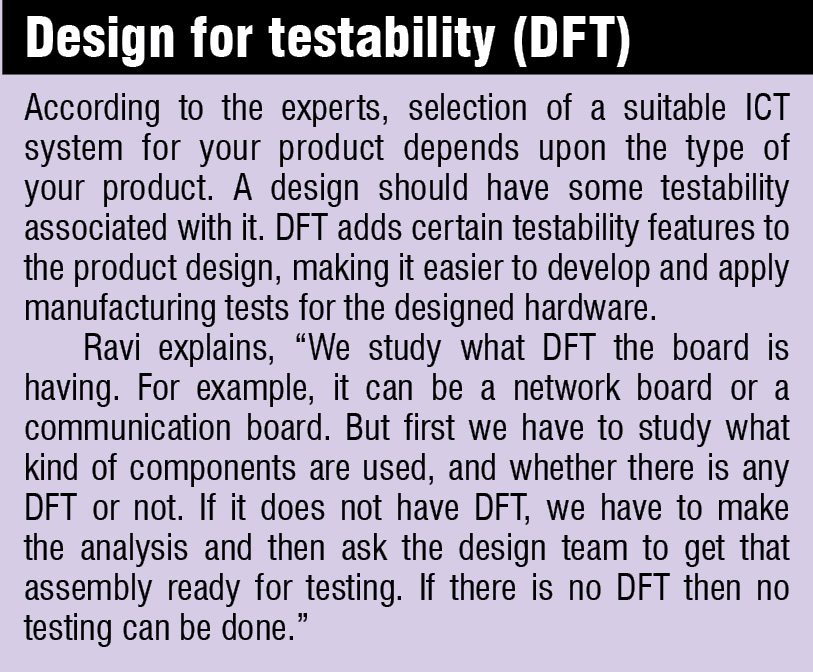 Ganapathy from QmaxTest says, “You should not depend too much on one test methodology or a particular approach. Integrated ICT solutions are a boon. Combinational approach has an advantage of two or more techniques so that yield is more and efficiency is increased.”

Assemblies are getting more complex day by day; you cannot have the test point on each and every point. Moreover, all the complex components in the latest PCBs are boundary-scan enabled. In this context, methods like JTAG boundary scan make it more convenient to access the I/O pins of the JTAG-compliant ICs present on the circuit board.

Even if you have a multiple chain of components that are boundary-scan enabled, these can be tested all together in one chain. This ability to daisy chain all the JTAG-compliant components on the circuit board, reduces the amount of wiring while keeping similar test coverage. Apart from the vector-less testing you can also perform on-board programming of the components using JTAG ports. 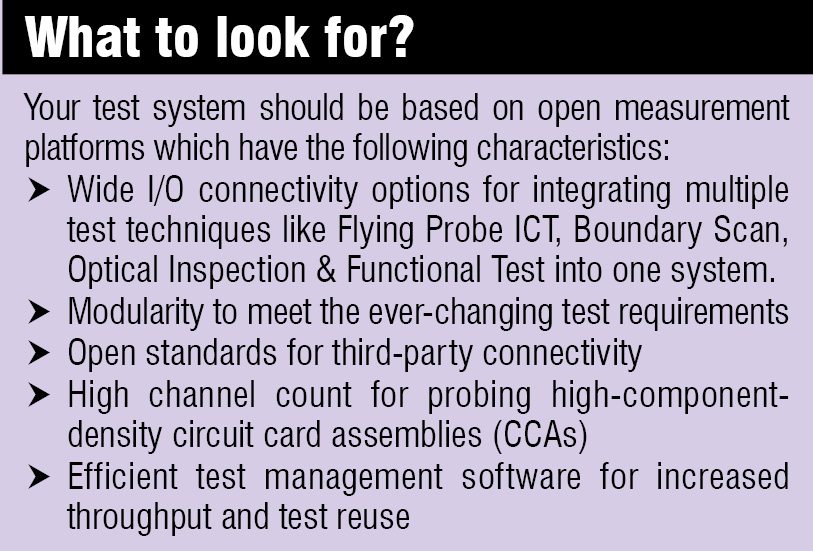 Parametric testing. Parametric measurement units (PMUs) are integrated with the latest ICT systems. Usually these come with 4 PMUs, capable of measuring voltage and current with respect to reference current and voltage, respectively. This makes them very useful for analogy testing as well. Since these are integrated in the same digital platform, you are able to effectively test digital, mixed logic, analogue or mixed-signal assemblies.

Integrated intelligence. Integrated intelligence is taking ICT to a whole new level. There are learn and compare features included where the system learns from the golden board and then compares the results. Also, some can learn from past test results and perform a few additional tests, if needed, to produce useful and comprehensive reports.

Increased precision with rotational movement of flying probes
The robotic testers have added a lot of automation. These testers, or the flying probes or the automated probes in ICT systems, can go as close as 20 mils/500 microns between two pins. Complex PCBs sometimes have components that are soldered at certain angles to the PCB plane. So, for high accuracy, the probe should also be able to move at an angle.

Previously probes could move only in x-y direction, but now systems include range expansion rotational movement where you can rotate the probe at different angles, thereby allowing you to go very close to the adjacent pins and increasing the testing accuracy.

QTouch 1248 Flying Prober from QmaxTest is based on the technology of hands-free probing which can probe both sides of the board due to its vertical design. It provides scalability from one to eight probes with a maximum of four probes on each side of the board. Apart from X, Y and Z axes, probes can move in theta direction up to an angle of 36 degrees.

Software Help
With the latest software tools, application engineer’s job has been totally reduced. With graphical user interface (GUI), you perform all the tests in a graphical way. There is no need to write codes for complex circuits. The GUI provides flexibility to the system and assists test environments for different production cycles.