Amazon Echo is a speaker with an inbuilt microphone, which is always listening. You can turn off this microphone with the help of a button. You can ask it about the weather, check news headlines, set an alarm, play your favourite singer’s song, shuffle your phone’s playlist, control home appliances, ask general questions and a lot more. Just say ‘Alexa,’ followed by your command. (Alexa is the wake-word used for Amazon Echo. You can change this wake word to Amazon or Echo if you want.)

In terms of multimedia, Echo consists of a woofer and a tweeter. For voice capturing, it has a seven-microphone array (six mics arranged in a symmetrical manner on the perimeter and one in the centre). There is a volume-control wheel on the top surrounded with a blue LED ring. It also has a mute button in case you do not want Echo to listen. 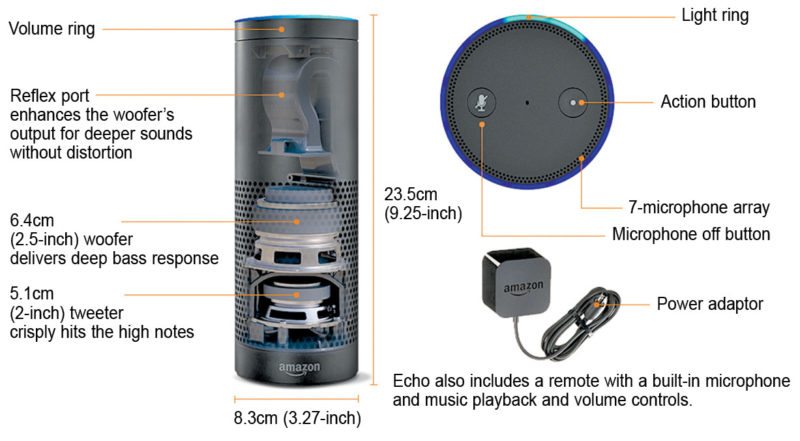 Till date Siri was considered to be the best virtual personal assistant, but here are some features that make Echo better than Siri.

Faster than Siri. Echo is faster at responding as compared to Siri, which takes some time in understanding the command. Echo does it all in a fraction of seconds. This makes us feel like we are interacting with a live personal assistant.

Incredibly accurate. Siri frequently misunderstands what you are trying to tell. Voice recognition on Amazon Echo is pretty accurate.

Distance. With Siri you have to be close to the device to interact with it—just a few centimetres away. While with Echo, due to the presence of a seven-array microphone, you can interact with it from far; you can even be one room away!

Improvements. Echo is added with a new skill every Friday, and users get notifications via emails about each new skill added that week. It already has 500+ skills like checking your bank balance, checking fuel in your car and so on. While, in case of Siri, its features also get updated frequently but most users are unaware of the many features.

Amazon Echo has three different products, namely, Amazon Echo, Amazon Tap and Amazon Echo Dot. Amazon Tap can be regarded as a handy version of Echo. It is a great product for people on-the-go as it is a portable device that can conserve up to nine hours of battery, while still providing access to Alexa.

Echo Dot is a sleeker and compact version of Echo. Its dimensions are equal to the size of a burger. It does not have the amazing speaker of Echo; instead it comes with a basic speaker at half the price of Echo. It has the option of connecting with an external speaker via a cable or Bluetooth.