The word ‘quantum’ is always used to refer to something immeasurably large. So when 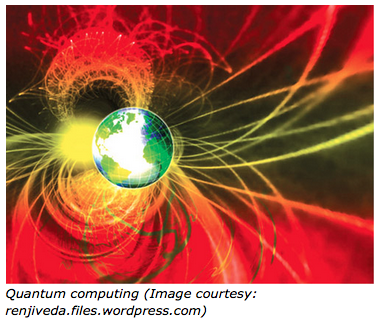 quantum physics finally meets computer engineering, just imagine what the resulting computer would be like!

“Combining physics, mathematics and computer science, quantum computing has transformed from a visionary idea to one of the most fascinating areas of quantum mechanics in the last two decades. The circuits on a microprocessor will be measured on an atomic scale. Quantum computers will harness the power of atoms and molecules to perform memory and processing tasks significantly faster than any silicon-based computer,” explains Venkata Ramana, senior vice president, Hinditron-Cray India.

Today’s conventional computers represent information using two states, ‘0’ and ‘1.’ In contrast, quantum computers operate with more than two states. They encode information as quantum bits, or qubits, which can exist in superposition. Because a quantum computer can manipulate information in multiple states simultaneously, it has the potential to be millions of times more powerful than today’s most powerful supercomputers.

“The good news is that scientists have already built basic quantum computers that can perform certain calculations, as proof-of-concept. A practical quantum computer is still years away. Most research in this field is still highly theoretical today,” adds Ramana.

When quantum computing finally comes of age, we will have secure quantum computers, quantum routers and quantum Internet based on photonic networks with advanced encoding, points out Dr Borkar. He further explains that quantum computers would use quantum particles instead of binary bits – and this includes the use of impurities in materials, rare metal atoms and crystalline structures.

Recently, a multinational team of researchers built a basic quantum computer inside a diamond. The team, funded by the US Army, tapped the impurities inside diamonds to build their quantum computer. The spins of two stray subatomic particles—a nitrogen nucleus and an electron—were used as the two qubits. Since electronics is susceptible to decoherence, the team also incorporated a level of protection using microwave pulses to continually switch the direction of electron spin rotation.

They also demonstrated the quantum properties of the computer using Grover’s Algorithm—a test developed in 1996 at Bell Labs to show the promise of quantum computing. The test involves searching an unsorted database, akin to searching for a name in a phone book when you have only the phone number. Generally, a normal person or computer would find this in X/2 tries, if ‘X’ is the total number of choices. However, with superposition, a quantum computer can do this much faster. The new diamond computer picked the correct choice on first try, 95 per cent of the time.

“This demonstration of performing a quantum algorithm at the subatomic level with single spins suggests a pathway to build increasingly complex quantum machines, using qubit control protocols that circumvent the expected limitations from real materials,” said one of the researchers in a press release.