Well, there is no denying that today’s wireless technologies can also transmit signals through walls and stones. But, consider a 240-metre wide solid stone! In another scientific marvel, the world’s first neutrino-based communication was achieved this year. This could mean giant leaps for telecommunications. 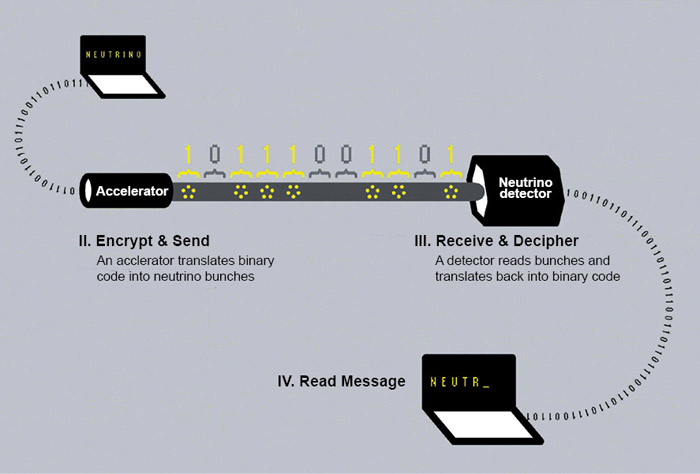 Neutrinos are particles with little or no mass, and no charge, that travel at almost the speed of light. Due to these properties, they can penetrate through anything, and that is what makes them desirable for telecommunications.

A group of researchers from the University of Rochester and North Carolina State University managed to use these neutrinos to send a message through 240 metres of stone. Neutrino-based communication would make it possible to communicate between any two points on Earth without using satellites or cables. It can also be used for communication in outer-space. However, the communication systems involved would be much more complex than today’s systems.

The team of scientists performed their test at the Fermi National Accelerator Lab situated outside Chicago. There, they used one of the world’s most powerful particle accelerators and a multi-ton detector called MINERvA, located 100 metres under the ground. The accelerator created high-intensity beams of neutrinos by accelerating protons around a 4-kilometre-circumference track and then colliding them with a carbon target.

A message was translated into binary code. Each ‘1’ represented neutrinos being fired, and each ‘0’ represented those not being fired. The neutrinos were fired in large groups because they are so evasive that even with a multi-ton detector, only about one in ten billion neutrinos are detected. After the neutrinos were detected, a computer on the other end translated the binary code back into English. It is actually more complex than it sounds—systems used by the team were terribly complex, making them impractical for everyday use.

That said, this is a major breakthrough, as according to reports from the University of Rochester, this is the first neutrino experiment in the world to use a high-intensity beam for studying neutrino reactions with nuclei of five different target materials, creating the first side-by-side comparison of interactions. This will help complete the picture of neutrinos and allow data to be more clearly interpreted in current and future experiments.