Researchers at NASA’s Goddard Space Flight Centre have developed miniature sensors using graphene—a material comprising tightly-packed carbon atoms, available in one-atom thick sheets. Graphene is expected to be the next revolution in electronics since silicon. For the last few years, scientists have been figuring out how to manufacture devices using graphene, NASA’s graphene sensors being a notable forerunner.

NASA scientists are using graphene to develop nano-sized sensors in order to detect atomic oxygen and other trace elements in the upper atmosphere and structural strains in spacecrafts. Graphene oxidises when it absorbs atomic oxygen, producing a change in the material’s electrical resistance that a graphene-based sensor could then quickly count to produce a more accurate density measurement. Graphene could also help in measuring methane, carbon monoxide and other gases. Similarly, graphene’s unique properties could also help in detecting stress in materials used to make spacecraft components.

At NASA, a special technique called chemical vapour deposition (CVD) has been developed to manufacture and test a large piece of graphene. Once scientists perfect the technique to manufacture graphene, its extreme characteristics could be put to use in electronics—to make lightweight, thin, flexible and durable displays, integrated circuits, solar cells, sensors and more.

For many years now, scientists have been researching how birds and animals, especially 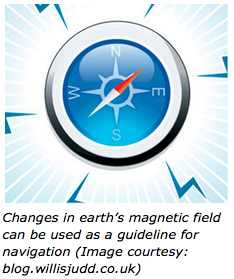 turtles, navigate using changes in the Earth’s magnetic field as a guideline. If quantified further, this information could be useful in designing navigational systems.

As an example, a team of Finnish researchers has developed an indoor positioning system (IPS) inspired by how homing pigeons and spiny lobsters use changes in magnetic fields to find their way. When they studied these species, they realised that some animals could sense their true position relative to their destination, since they could detect the direction of the Earth’s magnetic field.

They used this observation to develop a solution (IndoorAtlas) to indoor navigation, which has long been an unsolved problem as metallic structures in buildings disrupt the Earth’s magnetic field rendering phone compasses useless indoors.

Modern buildings with unique concrete and reinforced steel structures have spatially-varying ambient magnetic fields. Each building, floor and corridor creates a distinct magnetic field, which can be used for positioning. The team decided to use this for mapping an area and navigating around it.

If successfully implemented, the same logic could be extended to larger navigation applications too.