What is AC Current?

The AC current changes its polarity and magnitude periodically and continuously with respect to time. The Ac current can be produced with a device named alternator that produces the alternating current.

Let’s Understand the Ac current with the water analogy

Suppose a piston is inserted inside a pipe and connected with a rotating rod as in the pin pic below. Here the piston has two strokes one towards upward and the other towards backward on the upward stroke, the water moves in a clockwise direction and the backward direction the water displaces in an anticlockwise direction so in this way water direction changes its direction periodically with oscillation of the piston.

Every Ac Waveforms have a divider line or called the zero voltage line that divides the waveform two halves as the Ac current changes the magnitude and direction periodically so on every one complete cycle it reaches zero volts.

Amplitude:-The magnitude of the signal is called amplitude 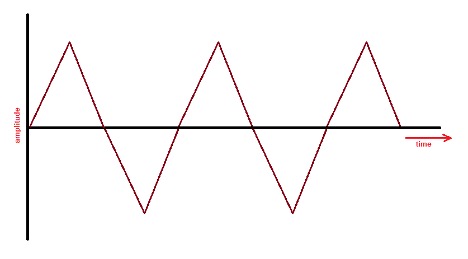 What is DC Current?

We can get DC from Ac current using the process called rectification and the device that does this is called a rectifier.

Difference between AC and DC

To know about which current is more dangerous AC or DC: click here