This article explains the basic difference between M2M and IoT. It will start from M2M and IoT basic principle along with its applications.

M2M, or machine-to-machine, is a direct communication between devices using wired or wireless communication channels. M2M refers to the interaction of two or more devices/machines that are connected to each other. These devices capture data and share with other connected devices, creating an intelligent network of things or systems. Devices could be sensors, actuators, embedded systems or other connected elements.

The Internet of Things (IoT) is the network of physical devices embedded with sensors, software and electronics, enabling these devices to communicate with each other and exchange data over a computer network. The things in the IoT refer to hardware devices uniquely identifiable through a network platform within the Internet infrastructure. 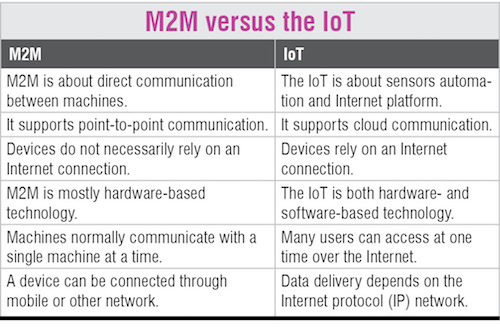 However, there is a lot of confusion between the IoT and M2M, as both refer to communicating and sharing data. M2M is about machines, smartphones and appliances, whereas the IoT is about sensors, cyber-based physical systems, Internet and so on. Some of the differences between M2M and the IoT are listed in the table.

Q. What is meant by PLC? What are the different types of PLCs used in Automation?

PLC stands for a programmable logic controller. It is a ruggedised industrial digital computer used for the control of manufacturing and automation of various electromechanical processes such as assembly lines, robotic devices or any activity that requires reliability control, ease of programming and process fault diagnosis.

PLC input can be in the form of digital or analogue signals. For example, limit switches, analogue variables from process sensors (such as temperature and pressure) and other complex data.

The most common programming language is Ladder Diagram (LD). The program is written using a personal computer and then transferred to a PLC through a suitable cable or network link. It is stored in the PLC either in RAM or some other non-volatile flash memory. A single PLC can be programmed to replace thousands of relays.
PLCs can be classified into two broad categories: integrated and modular.

Here, I/O interfaces and other components are housed in a chassis of smaller size with fewer features. It is built using several modules within a single case. Input/output capabilities are decided by the manufacturer.

It is built using various components that are plugged into a bus with extendable I/O capabilities. It consists of a power supply module, CPU and other I/O modules in the same rack. Such modules come in different sizes with variable power supplies, computing capabilities, I/O connectivity and the like.

Modular PLCs are further divided into the following three categories.

These are mini PLCs that are compact or placed next to the equipment to be controlled. These are limited to one or two modules, and use a logic instruction list or Relay Ladder as its programming language. These are used for replacing wired relay logics, timers and so on.

These PLCs are mostly used in industries and allow many modules that are mounted on the backplane of a system. The number of I/Os can be increased by adding additional cards. Many I/O points can be provided as per requirement.

These are used where complex process control functions are required. Their capacities are higher than medium-scale PLCs in terms of memory, programming language, I/O modules and more. Large-scale PLCs are generally used in Supervisory Control And Data Acquisition (SCADA) systems, larger plants and distributed control systems, among others.