LDR (Light Dependent Resistor) as the name states it is a special type of resistor that works on the photoconductivity principle means that resistance changes according to the intensity of light. Its resistance decreases with an increase in the intensity of light. It is often used as light sensor, light meter, Automatic street lights and in area where we need to have light sensitivity.

How are LDRs Made?

The LDRs made with photosensitive materials like Cadmium Sulphides (CdS) and are pleased on Zig-Zag Shape as you can see in the pic below.and two metal contacts are placed on both end of the Zig-Zag shape this metal contacts helps in creating connection with the LDRs. Now a transparent coating is applied on the top so that the zig-zag shaped photosensitive material gets protected and as the coating is transparent the LDR will be able to get light from the environment for its working.

It works on the principle of photoconductivity whenever the light on its photoconductive material falls it absorbs its energy and the electrons of that photoconductive material that is in the valence band get excited and go to the conduction band and thus increases the conductivity as per the increase in light intensity. Also, the energy in incident light should be greater than the bandgap gap energy so that the electrons from the valence band got excited and go to conduction band.

The LDR has the highest resistance in dark around 1012Ohm and this resistance decreases with the increase in Light. 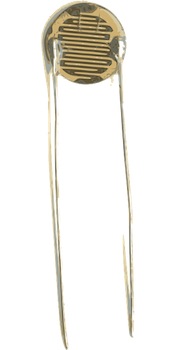 Difference Between Photocell and LDR

Photodiodes give quick response and are used where needed to detect quick response on and off like in optical communication, optoisolators. The photodiodes are semiconductor devices and work on PN junctions. The photodiode works on the principle of converting the light energy into electric energy while the LDR is a resistance and its resistance decreases with the increase in light intensity.

TLD6098 Allows Full Control of LED Headlamps Without a Microcontroller

MicroLED Advantages And Hurdles In Their Production