How Does A Thyristor Work?

Before going deep into the workings of a thyristor, let’s understand why it is needed when we already have a tiny component named transistor that can help us in switching and amplification.

While a transistor can perform switching, they are not good in handling large amounts of current. Another problem with the transistor is that they get turned OFF when we remove the switching current.

A thyristor is a four-layer solid-state semiconductor device that contains 3 PN junctions in series having 3 terminals called anode, cathode and gate. Like a diode, a thyristor is a unidirectional device as well but unlike diode, it can be used as an open circuit switch.

Working Principle of a Thyristor

In a thyristor, the silicon wafer is doped with four alternate P and N types, which looks like two transistors connected back-to-back (as seen in the pic below). 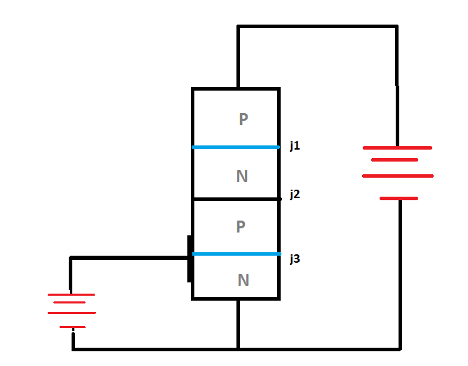 Here, the P (cathode) and the N (anode) are joined in series, thus we get three terminal pins: anode, gate and cathode.

When we supply current to the gate, then the j2 junction layer starts breaking and the current starts flowing in the circuit. When a sufficient positive signal current or pulse is applied to the gate terminal, it triggers the thyristor into a conducting state.

A thyristor can only be fully on or off, means it cannot lie in between On and Off states similar to transistors. This makes a thyristor unsuitable as an analog amplifier, but useful as a switching device.

Junctions j1 and j3 are in forward working state while j2 is in reverse biased state and does not allow the current to flow.

Here a positive voltage is applied to the gate terminal, causing the j2 depletion region to break down. Due to this, current starts flowing in the circuit and results in switch ON mode.

Here we give negative voltage to anode and positive voltage to cathode while the gate is kept in an open circuit, causing j1 and j3 to be in reverse bias and j2 in forward bias. As j1 and j2 are reverse biased, the flow of current is not possible.

Uses and Types Of Thyristors

There are generally 3 different kinds of thyristor:

It has the ability to control huge current and is generally used as high frequency switch in an electrical circuit.

They are used in inverters, AC drives, induction heater etc.

They are used in SMPS, motor control, induction heating, etc.

We use thyristor as switching circuit where we have to control motors and operate ON/OFF lamps.

Note: Thyristor devices are mainly used where high voltage and current are involved and are often used to control alternating currents (AC)