APRIL 2009: Light-emitting diodes (LEDs) are small but powerful devices in terms of their diverse applications. LED lights assume greater significance in the context of need for electrical energy conservation and pollution control world over. These are used as indicators in various equipment, for lighting and decorations at homes, and in flashlights, signboards and car lights.

LED lights differ from traditional light sources in the way these produce light. In incandescent bulbs, a tungsten filament is heated by electric current until it glows or emits light. In fluorescent lamps, an electric arc excites mercury atoms, which emit ultraviolet (UV) radiation. After striking the phosphor coating on the inner side of the glass tubes, the UV radiation is converted into visible light and emitted. On the other hand, LEDs are diodes made from semiconductor materials. This is why these are referred to as solidstate devices. They rely on indium-gallium nitride to convert electricity into photons when current flows through it. 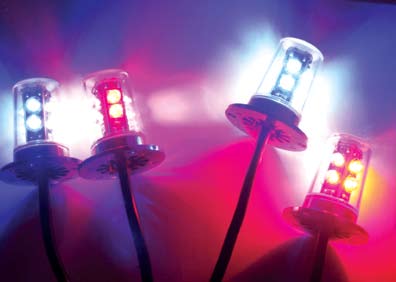 An LED is basically a small-area source, often with extra optics added to the chip that shapes its radiation pattern. The specific wavelength or colour emitted by the LED depends on the materials used to make the diode. It depends on the composition and condition of the semiconducting material used, and can be infrared, visible or near-ultraviolet.

LED-based light technology is a subject of intense research and development. It is predicted to radically change the energy consumption patterns throughout the world over the next few years. Therefore a phenomenal amount of resources are being devoted to improve the LED technology worldwide. The US has committed a large amount of industrial policy support for R&D on LEDs. Asia is a hot bed of cutting-edge manufacturing technology, and Europe and Canada have led the way in energy-efficient initiatives accompanied by some of the most innovative design styles.

Fig. 1 shows the parts of a common type of LED structure. There are major differences between LEDs and other diode types. An LED has a transparent package, allowing visible or IR energy to pass through. Also, the LED has a large p-n junction area whose shape is tailored to the application.

The device shown in Fig. 1 is an AlGaInP LED because the semiconductor layers are aluminium (Al), gallium (Ga), indium (In) and phosphate (P). It is illuminated with the movement of electrons in the semiconductor material, when an electric current passes through it.

Connecting, soldering and testing LEDs
LEDs must be connected the correct way round. A simple way to identify cathode is the short lead, and the body of round LEDs may be slightly flat towards cathode. If you see inside an LED, you will notice that the cathode is the larger electrode.

LEDs can be damaged by heat while soldering. So you have to be quick enough to ward off this small risk. Never connect an LED directly to a battery or power supply. It will destroy almost instantly because too much current will pass through and burn it out.

LEDs must have a resistor in series to limit the current to a safe value. For the purpose of quick testing, a 1-kilo-ohm resistor is suitable for most LEDs if your supply voltage is 12V or less.

Materials used for production
LEDs are usually built on an n-type substrate, with an electrode attached to the p-type layer deposited on its surface. Many commercial LEDs, especially GaN/InGaN, also use sapphire substrate.

Most materials used for LED production have very high refractive indices. This means most of the light reflects back into the material at the material/air interface. Therefore light extraction is an important aspect of LED design and production. It calls for a lot of R&D work. 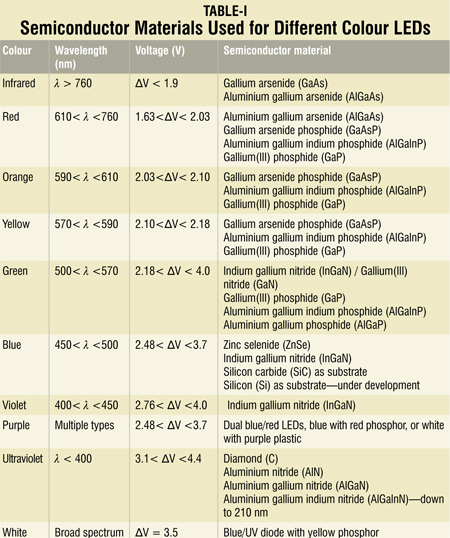 Conventionally, LEDs are made from a variety of inorganic semiconductor materials. Table I shows the available colours with wavelength range, voltage drop and material used.