Trends to look out for
Whilst the integration of renewable energy systems into existing grids will help cater to higher demand and improving efficiency, it will also need to consider the challenges posed by new consumption models like EVs and home automation. Additionally, increased use of sensors into different aspects of the grid, such as transformers, allows analysts to gain more data from the grid that they can then use for forecasting. “Furthermore, with the internet of things (IoT) enablement, smart meters and homes will come into play, which will further help optimise energy consumption,” adds Shailesh Thakurdesai, business development manager—microcontrollers, Texas Instruments, India.

“Based on the feedback that we received, this market also requires an extended temperature operating range of -40°C to 70°C and shares a need for secure Ethernet, redundant power supply, additional serial ports and running these new protocols such as DNP3 or IEC 61850,” explains Jamie Smith, director, Embedded Systems in a previous interview with EFY.

Microgrids are another popular trend. Enabling local power generation, microgrids comprise various small power-generating sources that make them highly fexible and efficient. Talking about this, “We have integrated existing hardware components in the market with a powerful embedded system. The setup forms an electricity grid that is small enough to be called a microgrid. This system is powered by renewable energy sources such as solar photovoltaics (PVs), wind and micro-hydel. It can be remotely monitored from anywhere in the world,” explains Ganesh Shankar, managing director, FluxGen Engineering Technologies.

One smart grid application example is with LocalGrid Technologies, which focusses on a microgrid application where they are controlling the energy coming on and off the grid. “This application is able to provide security features because it is based on Linux, and the additional performance made this a more viable solution for the smart grid compared to that achievable with the NI cRIO-9074 system,” adds Smith.

Government policies promoting smart grid implementation
B. N. Sharma, IAS, joint secretary, Ministry of Power, states in the roadmap that APDRP-I upgraded basic electricity networks in 56 urban circles, whereas RGGVY electrified 56 million households. The ongoing R-APDRP covers 1401 towns across state-owned electricity distribution companies. under this programme, the distribution companies are building their IT networks and a set of basic IT and automation systems for the first time.

What needs to be done to get things moving
The Kerala State Electricity Regulatory Commission (KSERC) has put in place a system to enable large power consumers to access energy from sources of their own choice, using the linked network of transmission and distribution licencees. 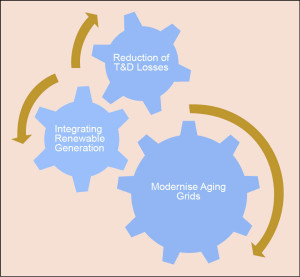 Power Grid Corporation of India jointly with Electricity Department, government of Puducherry, is developing a smart grid pilot project at Puducherry through open collaboration. The project is being implemented to achieve a common information-sharing platform, scalable and replicable at other places, and shall also help in demonstration of effectiveness of each functionality. This project requires approximately 87,000 smart meters and a street-light automation solution that will prove substantial savings to the electricity department of the government of Puducherry (PED). CG’s utility distribution franchise that operates in Jalgaon efficiently manages the multiple data obtained from the intelligent devices installed at all voltage levels, enhancing the quality of service provided to the utility’s end users and drastically reduces technical and non-technical losses.

Authorities have come out with four types of electronic meters, and specifications for those have been released. Features of those are frozen on the payment side as well as the relay for remote connect disconnect feature. “What is lacking is the communications protocol that is currently open ended. This is currently being managed by the system integrator based on what makes sense to them depending on the area,” says Thakurdesai. Government is starting 14 smart grid pilot projects across cities in India, to implement certain technology, and to understand this from an Indian deployment perspective.

Under the current 12th 5-year Plan, the government will roll out full smart grids in pilot project cities, as well as the infrastructure for AMI to all consumers with load greater than 20kW. The government is also working on the implementation of dynamic tariffs, mandatory demand response programmes for certain categories of customers and a tariff mechanism for rooftop solar PVs.

We can also expect the first set of technical standards after completion of pilots, including standards for EVs and their charging infrastructure. Moreover, 10 per cent of utility technical personnel are to be trained in smart grid solutions.

“Now, there is an upcoming rule, which has already started in a few states, that people who are pumping harmonics into the network will be penalised. Harmonics is not generated from the source side but the load side. The consumer is the culprit who is using a lot of equipment generating harmonics. Now everyone will wake up,” says A.V. Srinivasan, area manager—south, MB Controls and Systems. Big companies already have a solution to suppress harmonics; they are not allowing the harmonics to go out but are retaining them, which is also bad in a way.