Microstrip Antenna and Their Applications

Microstrip antenna are one of the most popular types of printed antenna. These play a very significant role in today’s wireless communication systems. Here we discuss microstrip antenna, their polarisation and radiation pattern, applications and upcoming trends.

The antenna is one of the critical components in any wireless communication system. The word ‘antenna’ is derived from Latin word ‘antemna.’ Since the first demonstration of wireless technology by Heinrich Hertz and its first application in practical radio communication by Guglielmo Marconi, the antenna has been a key building block in the construction of every wireless communication system. IEEE defines an antenna as “a part of a transmitting or receiving system that is designed to radiate or receive electromagnetic waves.”

This is the basic type of an antenna, widely used on top of the buildings, automobiles, ships and spacecrafts. These antennae are made into different shapes such as a straight wire (dipole), loop and helix.

These antennae are in the form of a slot or aperture in a metal plate and commonly used at higher frequencies (3-30 GHz). Typical examples are slotted waveguide antennae and horn antennae. These antennae are very useful for aircraft and spacecraft applications, because they can be conveniently flush mounted on the surface of the aircraft or spacecraft.

In practice, these antennae are covered with a dielectric material to protect them from hazardous environmental conditions.

By definition, a printed antenna is one that is fabricated using standard photolithography technique. The most common version of printed antenna is microstrip antenna, which consists of a metallic patch above a ground plane. The shape and size of patch determine the frequency of operation of the antenna and its performance.

These antennae are more popular because of their low cost and ease of fabrication, and easy integration with circuit components. Printed antennae are inexpensive to fabricate using modern printed circuit technology, and are conformal to planar and non-planar surfaces. These antennae can be easily mounted on the surface of aircrafts, spacecrafts, satellites, missiles and even on handheld mobile devices.

In an array antenna, several radiators separated from each other are geometrically arranged to give desired radiation characteristics that are not possible to achieve with a single independent radiating element. The arrangement of array elements is such that radiation from individual elements adds up to give the maximum radiation in a particular direction or directions, and minimum radiation in other directions. In practice, individual radiators are arranged in linear or planar grid depending on the application.

These antennae are specifically used in applications requiring communication over long distances, such as outer space exploration and satellite communication. They are built with large diameters in order to achieve the high gain required to transmit or receive signals over very long distances. The reflector antenna usually uses a smaller antenna as the feed.

In these antennae, lenses are used to collimate the incident divergent energy to prevent it from spreading in undesired directions. By choosing the appropriate material and setting the geometrical configuration of lenses, they can transform various forms of divergent energy into plane waves. Lens antennae are classified according to the material from which they are constructed or their geometrical shapes. 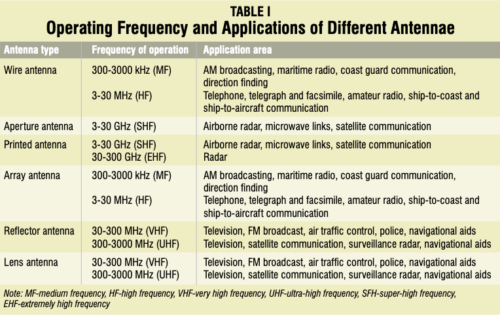 Microstrip antenna is one of the most popular types of printed antenna. It plays a very significant role in today’s world of wireless communication systems. Microstrip antennae are very simple in construction using a conventional microstrip fabrication technique. Microstrip patch antenna consists of a radiating patch on one side of a dielectric substrate (FR4) that has a ground plane (Cu) on the other side as shown in Fig. 1.

The patch is generally made up of a conducting material such as copper or gold and can take any possible shape like rectangular, circular, triangular, elliptical or some other common shape. The radiating patch and the feed lines are usually photo-etched on the dielectric substrate.

Microstrip patch antennae radiate primarily because of the fringing fields between the patch edge and the ground plane. For good antenna performance, a thick dielectric substrate having a low dielectric constant (<6) is desirable since it provides higher efficiency, larger bandwidth and better radiation. However, such a configuration leads to larger antenna size.

In order to design a compact microstrip patch antenna, a substrate with a higher dielectric constant (<12) must be used, which results in lower efficiency and narrower bandwidth. Hence a compromise must be reached between antenna dimensions and antenna performance. Excitation guides the electromagnetic energy source to the patch, generating negative charges around the feed point and positive charges on the other part of the patch. This difference in charges creates electric fields in the antenna that are responsible for radiations from the patch antenna.

Three types of electromagnetic waves are radiated. The first part is radiated into space, which is ‘useful’ radiation. The second part is diffracted waves, which are reflected back into space between the patch and the ground plane, contributing to the actual power transmission. The last part of the wave remains trapped in the dielectric substrate due to total reflection at the air-dielectric separation surface. The waves trapped in the substrate are generally undesirable.

Different types of antennae have many different shapes and dimensions. Microstrip antennae can be classified into four subtypes:

Polarisation and radiation of microstrip antennae Microstrip antennae are also used in the fields of RFID (radio frequency identification), mobile communication and healthcare. Basically, an RFID system consists of a tag and a reader. Generally, it uses frequencies between 30 Hz and 5.8 GHz.

The IEEE 802.16 standard is known as WiMax (worldwide interoperability for microwave access). It can reach up to 48km (30-mile) radius with data rate of 70 Mbps. Microstrip antennae can resonate at more than one frequency. Therefore these can be used in WiMax-based communication equipment.

Mobile communication requires small, low-cost, low-profile antennae. In some mobile handsets, semiconductor-based diodes or detectors are used as antennae. They are much like p-n diode photo-detectors but work at microwave frequency. Many times omnidirectional antenna is used in mobile phones. There are different kinds of antennae like planar inverted-F antenna, folded inverted conformal antenna and mono pole. Also retractable whip antenna is commonly used in handsets.

The phone is subdivided into roughly 60 components, each consisting of hundreds or even thousands of individual facets. The internal structure of a mobile handset is shown in Fig. 3.

In the treatment of malignant tumours, microwave energy is said to be the most effective way of inducing hyperthermia. The radiator to be used for this purpose should be light-weight, easy to handle and rugged. Only a patch radiator fulfils these requirements.

The initial designs of microstrip radiators for inducing hyperthermia were based on printed dipoles and annular rings that were designed on S-band (2-4 GHz). Later on the design was based on a circular microstrip disk at L-band (1-2 GHz). Two coupled microstrip lines with a flexible separation are used to measure temperature inside the human body. Fig. 5 shows a flexible patch applicator that operates at 430 MHz.

Textile materials are increasingly being used for development of flexible wearable systems due to the recent miniaturisation of wireless devices. For flexible antennae, textile materials form interesting substrates, because fabric antennae can be easily integrated into clothes.

Textile antennae are still under testing, so they are rarely in focus.