Sanjay Banerjee is a tech enthusiast and a senior business leader at EFY. He is passionate about how businesses can benefit from technology--Nidhi Arora is executive editor at EFY

“Of all the forces of nature, I should think the wind contains the largest amount of motive power—that is, power to move things. Take any given space of the earth’s surface—for instance, Illinois; and all the power exerted by all the men, and beasts, and running-water, and steam, over and upon it, shall not equal the one hundredth part of what is exerted by the blowing of the wind over and upon the same space. And yet it has not, so far in the world’s history, become proportionally valuable as a motive power. It is applied extensively, and advantageously, to sail-vessels in navigation. Add to this a few windmills, and pumps, and you have about all. …As yet, the wind is an untamed, and unharnessed force; and quite possibly one of the greatest discoveries hereafter to be made will be the taming and harnessing of it.” —Abraham Lincoln

Globally, there is a huge emphasis on encashing the energy generation possibilities of renewable sources, especially wind. Wind power offers a sustainable option in the pursuit of renewable energy. In this article, we explore how wind energy is being utilised in different parts of the world.

A case study from Canada

Wind power promises to be more beneficial than any other existing source of energy. It doesn’t produce any undesirable and harmful waste, harnesses the power of nature (wind), and is one of the best alternatives to the burning of coal/gas or use of nuclear energy.

The Wolfe Island Wind Project in Canada aimed at meeting electricity needs of residents in Kingston, Ontario, through wind power. As part of the project, 86 turbines were placed in the wind farm with an investment of around 410 million dollars to generate sufficient electricity for 75,000 homes. The returns for the same were spread over 20-25 years.

The above calculation led to a conclusion that wind power comes with a premium price. To overcome price limitations, the Canadian government provided some subsidies and incentives like one per cent of tax benefit per kilowatt hour (kWh) of electricity produced using wind power.

Thus it can be concluded that wind power still has a long way to go before mass adoption as the turbine cost has to come down. Not all governments can afford such a technology. 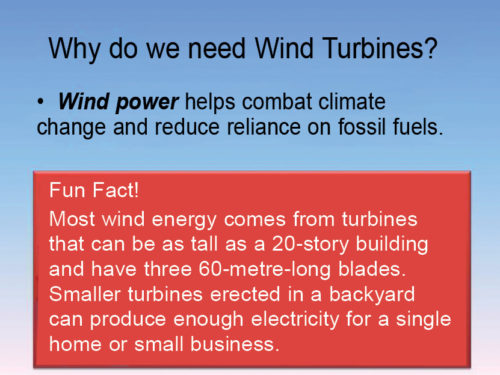 The case for India

India was among the first few countries in the world to establish the Ministry of New and Renewable Energy (MNRE). In the last two decades, the country has witnessed unprecedented growth in its wind power generation capacity from about less than 1GW (gigawatts) to more than 32.72GW till October 2017. India has the fourth largest installed wind power generation capacity in the world.

Of the total installed capacity for renewable energy generation, wind power accounts for about 10 per cent. It is seen that two-thirds of production happens between May to September months, coinciding with Monsoons. One of the major reasons behind the increase of wind power through the years has been the benefit of accelerated depreciation for businesses.

The levelised tariff for wind power reached an all-time low of ₹ 2.64 per kWh during bidding for various wind power development projects in October 2017. Previously, the bid rate was ₹ 3.42 per kWh in August 2017 in an auction by TANGEDCO (Tamil Nadu Generation and Distribution Corporation).

The MNRE has set a target of producing about 60,000MW of wind power by the year 2022. To achieve this ambitious target, the government plans to enter into offshore wind power generation. It plans to set up the first plant along the Gujarat coast.

At the end of 2006, worldwide capacity of wind-powered generators was 73.9GW. Although it is believed that wind power presently produces a little above one per cent of world’s electricity demand, it contributes around 20 per cent in Denmark, about 9 per cent in Spain and roughly 7 per cent in Germany. Around the world, wind power generation more than quadrupled between 2000 and 2006. There are many thousands of wind turbines operating, with a total capacity of 73,904MW, of which Europe accounts for 65 per cent (2006).

The most amazing part of wind power generation is no greenhouse gas emission. However, to derive the maximum benefit, wind power projects should be undertaken with long-term planning. To justify the heavy investment and variable output, these must be combined with other renewable technologies like reservoir-based hydro and gas plants.